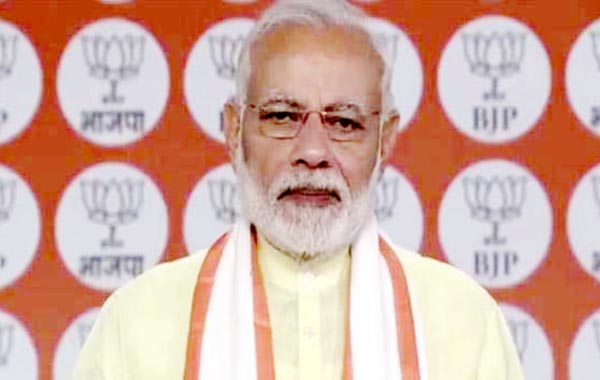 New Delhi, Prime Minister Narendra Modi on Thursday said that the opposition parties in the country are refusing to wake up from their 'slumber' and fear that there is "bigger wave" in favour of BJP than what was in 2013 and 2014. "Bhae laga hua hae ki yeh toh 2013 aur 2014 se bhi tej aandhi ayi hui hae (There is fear that there is a bigger pro-BJP wave than what was in 2013 and 2014)," the Prime Minister said interacting through NamoApp with BJP workers in Arunachal West, Ghaziabad, Hazaribagh, Jaipur Rural and Nawada Parliamentary constituencies. In this context, Mr Modi claimed it is this fear of BJP-wave that is making the opposition parties to "catch hold of each other....or else everyone will be blown away". "The opposition parties have developed a sense of crisis of confidence in themselves," he said. "Vipaksh jagne ke liye tayar nahi hae (Opposition parties are declining to wake up from slumber)," he said alleging the opposition parties feel if they talk about other issues and indulge in one allegation after another, they would be able to make a mark among the voters."Indian people are today sensitised and are aware of everything," he said. The Prime Minister said last four and half years the Congress and other opposition parties have been exposed. "First people gave a mandate and showed them the doors out of corridors of power for corruption...but when it came to discharging the duties as opposition parties, they have failed there too," Mr Modi claimed. Mr Modi said his government has able to take out sectors like coal and telecom from the hub of corruption and telecom sector has today emerged as one of the fastest growing sectors. He said his government is firm about 'Sabka Saath Sabka Vikas' model of governance and the welfare measures have been tailored not based on any caste but equity is the sole guiding theme.