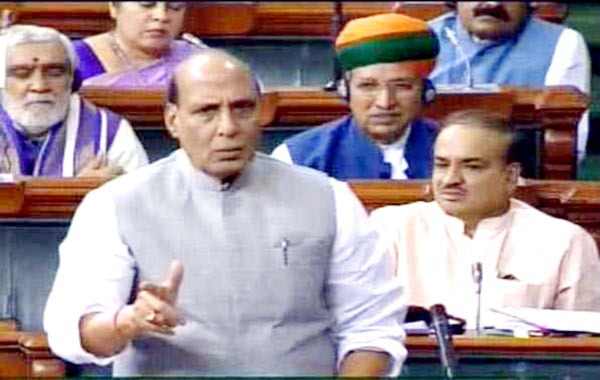 New Delhi, The vexed issue of mob lynching figured prominently in the Lok Sabha on Thursday with Congress party questioning the government's sincerity on the need to take urgent steps to stop the menace. Unsatisfied with the response from Home Minister Rajnath Singh on the issue, the main opposition party Congress staged a walkout from the House. UPA chairperson Sonia Gandhi and Congress floor leader Mallikarjun Kharge led the walkout by party MPs which was also joined by members from the Left parties, RJD and NCP. Raising the issue during Zero Hour, Congress member K C Venugopal wanted to know why some Union Ministers have been found "garlanding" the mob lynching accused. He said the "Government's attitude" on this issue and related matters ought to be questioned as recently some official agencies have been misused to defame nuns and staff of Mother Teresa-founded Missionaries of Charity. His reference was to the arrest of nuns in BJP-ruled Jharkhand on the charge of taking money for adoption of infants. Mr Venugopal's remarks provoked vociferous protest from the BJP members. In his response, Union Home Minister Rajnath Singh condemned various incidents of mob lynching and said though the law and order is a state subject, the Central government has never kept silence on the same. "In fact, we issued two advisories to the state governments urging them to take firm actions against the wrong doers and those involved in mob lynching," Mr Singh said adding while one advisory was issued in 2016 and the other was given by the Home Ministry in the first week of July this year. Congress floor leader Mallikarjun Kharge said Minister's response was not satisfactory.Even while Rajnath Singh was giving his response, many Congress MPs including Mr Venugopal asked why the members of Union Council of Ministers were found "garlanding" the mob lynching accused. The Home Minister also said that even earlier mob lynching has happened in the country and in no way these can be condoned.Mr Singh said states are responsible to take actions against those involved in mop lynching.The Minister also said several incidents of mob lynching have been taking place largely owing to the spread of fake news and rumour mongering in the social media. "The government has also urged the social media providers to take action so that there is a mechanism which can put a check on the spread of fake news and provocative rumour in the social media," Mr Singh said. After his response, Mr Kharge said the Home Minister's remarks were not satisfactory and thus the opposition would stage walkout.Members including Sonia Gandhi and others from RJD, NCP and Left parties staged walkout. Later talking to media persons outside Parliament, Congress MP Shashi Tharoor said: "Our party is not at all satisfied with the Home Minister's response in Lok Sabha on such an important issue. His response was like playing ping pong game.' Mr Tharoor said the Prime Minister Narendra Modi was also maintaining "a total silence" on this matter.