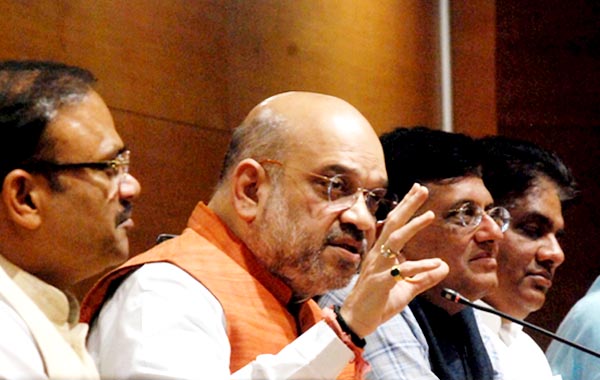 We want to remove poverty,instability, corruption

New Delhi, BJP President Amit Shah on Saturday said that in the run-up to 2019 general elections, his party’s response to the opposition slogan of ``remove Modi’’ is to ``remove instability, corruption and poverty’’. Addressing a press conference at the party headquarters here on the completion today of four years of BJP-led National Democratic Alliance government at the Centre, he said ``the politics of performance will be the party’s agenda.’’ ``People have already decided. In one year, people will give full mandate to the BJP. Because of Prime Minister Narendra Modi’s initiatives India has achieved a place of pride in the world and there has been change in the lives of the poor,’’ he said after enumerating achievements of the government from securing the borders to inclusive development and funding the unfunded. Fielding a variety of questions ranging from petrol hike and opposition alliance to whether Prime Minister Narendra Modi will be the BJP’s prime ministerial candidate in 2019 as well, Mr Shah said a lot had been done by the NDA in the last four years and a lot remains to be done within a year. He said the government was preparing a long-term policy to tackle the problem of hike in petrol prices. ``During the United Progressive Alliance regime, these prices of petrol were prevalent for three years, and now, you have started complaining in just three days,’’ he said, adding that within three days the government will come up with a policy. Asked to comment on Congress President Rahul Gandhi’s charge that the Modi government had ``failed’’, Mr. Shah said, ``What else do you expect him to say? He is in the opposition, he is bound to say such things.’’ On the Congress charge that the government was indulging in politics of untruths, he said, ``we have enumerated our achievements based on facts and statistics. Let the Opposition back their charges with facts and figures.' He denied the charge of a sense of fear in the country and said that those who have benami assets or those who do not pay taxes or those who are indulging in economic frauds need have any fears, not others. Slamming the Congress he said, ``Those who indulged in politics of dynasty are talking about democracy. Those who imposed Emergency in the country, threw a lakh of people in jail and gagged the media are talking about democracy.' In his response to the Congress charge that Mr Modi had brought down the dignity of the Prime Minister’s chair, Mr Shah said that Mr Modi as Prime Minister does not need to take instructions from elsewhere. Raising his voice, he said, ``the dignity of the Prime Minister’s chair has never been lower than when Cabinet approved Ordinance was torn publicly (by Rahul Gandhi). The way the UPA lost 14 states one after the other shows what people want.’’ On opposition alliance against Mr Modi, he said the BJP had faced such opposition even in 2014 elections when the party faced regional parties in different States. He said if the Telugu Desam Party had left the BJP, then the Nitish Kumar-led Janata Dal (United) had joined them. ``The NDA strength has gone up, not reduced.’’ On BJP alliance partner Shiv Sena declaring in Maharashtra that it will contest 2019 elections on its own, Mr Shah said, ``We want that the Shiv Sena is together with us in 2019. He said, ``you should ask them’’ when asked that the Sena doesn’t want to fight elections with the BJP, adding that they are still together in both, Maharashtra and at the Centre. Mr Shah made it clear that there shall be no tinkering with the Scheduled Caste/Scheduled Tribe Act and that his party will ``not allow anyone to end reservations, nor will itself do it’’. On the issue of differences within the judiciary as was brought out during a press conference by three judges against the Chief Justice of India, he said, ``there were no allegations against the government in that press conference.’’ When asked Rahul Gandhi said he wanted to be Prime Minister but none within his own party, nor opposition leaders like Sharad Pawar, Mamata Banerjee or Akhilesh Yadav backed him.’’ And, to a question on whether Narendra Modi shall be BJP’s Prime Ministerial candidate in 2019, Mr Shah said, ``there is no challenge.’’