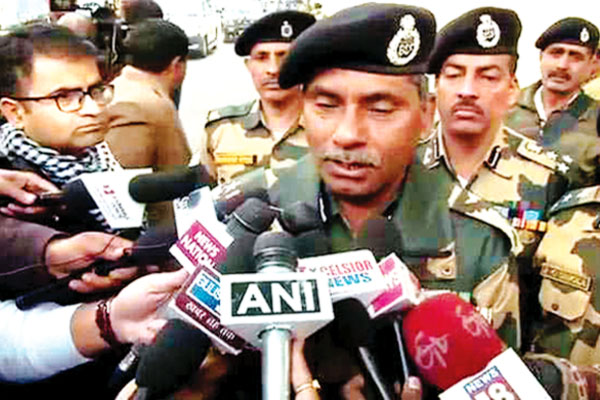 Agencies, New Delhi The Border Security Force avenged the death of its jawan by killing at least ten to twelve Pakistani rangers.The retaliatory action came a day after a constable of the BSF was killed in an unprovoked firing by Pakistan from across the border in the Samba sector of Jammu and Kashmir. Reports say three border outposts of Pakistan were also destroyed in the targeted firing.“Border Security Force gave a solid response in which Pakistan’s infrastructure, solar panel & weapons suffered heavy damages,” Ram Avatar, IG, BSF (Jammu). Head Constable R P Hazra, who hails from Murshidabad in West Bengal, has served for about 27 years in the border guarding force. He is survived by a daughter (21) and son (18). It was his 50th birthday on Wednesday. The incident came just days after an army personnel was killed along the Line of Control (LoC) in Rajouri district on December 31 last year.On December 23, an Army major and three soldiers were killed along the LoC in Rajouri and in retaliatory action, Indian troops killed three Pakistani soldiers in Pakistan- occupied Kashmir two days later. The BSF guards the Indo-Pak International Border (IB) in the region.Mr Awtar said that BSF has the history of bravery and courage and the Bordermen are always ready to sacrifice their lives, if comes to the national security. “BSF has given a befitting reply to Pakistan Rangers for their cowardly act,” he added and said that the sacrifice of the jawan shall be remembered forever. He asserted that on Thursday morning, despite dense fog in the R S Pura Sector alert BSF troopers detected an intrusion attempt around 0545 hrs and Pakistan intruder was neutralised about 0700 hrs. “Eliminated intruder belongs to Sialkot and is in his late thirties while his identity was ascertained as Anwar,’’ said an official.“BSF is maintaining extra vigil on the Jammu IB to negate all sorts of intrusion attempts by miscreants which are helped by Pak forces. Firing across IB is most of the time diversionary tactics for facilitating intrusion,” said the BSF Officer. The Cremation of the martyr will take place at his native Village - Hat Para, PO Rampara, PS - Raji Nager, District Murshidabad, West Bengal.However, Director General of Police, Jammu and Kashmir Dr SP Vaid said, “those who are thinking they have done good by murder of humanity, need to introspect. Our forces are capable of giving them a befitting reply”.