Padmaavat' opens to good response amid high security, multiplexes in 4 states not to screen film 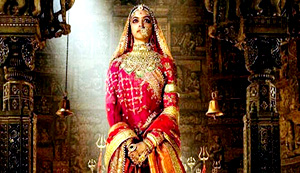 New Delhi, After a long wait, Sanjay Leela Bhansali's period drama 'Padmaavat' gets set for a worldwide release on Thursday even as violent protests have put a question mark on the film's release in many North Indian states. Though trade sources said the film opened to a good response across the country, screenings in theatres are being held under tight security following threats of disruption by the Karni Sena. Despite the Censor Board clearance for 'Padmaavat' and Supreme Court striking down the ban by some state governments, uncertainty looms on its release in many states like Rajasthan, Madhya Pradesh, Gujarat and Goa with the activists of Rajput Karni sena threatening to disrupt theatres screening the film. Despite assurances by the makers of the film that 'Padmaavat' will maintain the honour and dignity of Queen Padmavati, the Karni sena continues to carry out protests against its screening. With violent protests against the release of the much-awaited flickt witnessed from several north Indian states, the Multiplex Association of India on Wednesday evening said its members would not screen the period drama in Rajasthan, Gujarat, Madhya Pradesh and Goa. The decision of the association, which represents about 75 per cent of the multiplex owners in the country, came as Rajput outfits and other fringe elements vandalised malls, burned vehicles, and issued open threats to theatre owners and public in their bid to stall its release, claiming distortion of history. Theatre owners in Gujarat said ‘Padmaavat’ will not be screened in any of the multiplexes or single screens in the State till the row over the film is resolved.The Gujarat Multiplex Owners Association said the decision has been taken for the safety of customers as well as to save their property. In other states like Uttar Pradesh, Uttarakhand, Haryana and Delhi, violent protests by Rajput groups have forced deployment of security in theatres screening the film.In fact, some theatre owners in Delhi-NCR are also considering not screening the film till the row is over. Many multiplexes in Delhi-NCR are considering cancelling shows of 'Padmaavat' after the violent stir by members of the Rajput Karni Sena.Movietime cinema in Greater Noida has already decided to cancel a show on Friday evening that was fully booked online. Several theatres in Rohini, Delhi, are also considering stopping shows. Various state governments have put in place security measures outside theatres screening the film.Prohibitory orders have been imposed in Gurugram till Sunday to maintain law and order in view of the Karni Sena`s threat to target theatres screening the film. There are over 40 multiplexes and cinema halls in Gurugram. "Section 144 of the Code of Criminal Procedure, which bans unlawful assembly, has been imposed in view of `Padmaavat` release in various cinema halls and multiplexes on January 25 as there is likelihood of law and order problem, officials said. People have been banned from carrying firearms and other articles capable of causing injury, raising slogans and exhibiting placards within a 200-metre radius of cinema and multiplexes from January 23 to January 28, 2018. Security around cinema halls in UP has been increased.The multiplex association of India says that in the states like Delhi, UP and Uttarakhand where the film would be released, private security guards would be deployed outside cinema halls besides police. Distributors in Delhi have sought help from Delhi police to deploy police personnel outside the theatres screening the film in Delhi and NCR.Violent protests were witnessed in many states including Rajasthan, Haryana, Madhya Pradesh and Uttar Pradesh yesterday, a day ahead of the release of 'Padmaavat'. A Haryana Roadways bus was set ablaze and another vandalised in Bhondsi area in Gurugram district by a group of around 50 men, alleged to be Shri Rajput Karni Sena supporters. They also pelted stones at the Haryana police personnel deployed on the Gurugram-Alwar National Highway, injuring a few policemen. Further, a school bus carrying children and staff was also damaged in stone-pelting, though no one was said to be injured. Road traffic was disrupted for hours in the area following the violent protest by youths belonging to the Rajput community who had their faces covered. Uttar Pradesh's capital Lucknow too witnessed protests near malls and theatres on Wednesday from activists claiming to be associated with a Rajput fringe group.In Bhopal, Madhya Pradesh, a car caught fire during anti-Padmaavat protests on Wednesday evening. Persisting with the protests, the Karni Sena said their leaders may be arrested and bullets fired but the protest would continue.They claimed that they are getting the support of film hall owners and film distributors. The protests against the film notwithstanding, Trade sources said the film has opened to a huge response across the country with theatres screening the film reporting house full shows. Despite the security threat from karni Sena, people are thronging to theatres in large numbers out of curiosity around the film caused by the nationwide protests.In fact, a day ahead of the release of the film, it's lead actress Deepika Padukone on Wednesday said she is very excited for the release . 'Padmaavat been through so much. To see it finally releasing and the reaction it is getting is extremely overwhelming. I am very excited for the release.'It is a big day for all of us. On behalf of entire crew we want to thank you for being so supportive,'she said. Expressing confidence that the film would do wonders at box office, she said, 'it's time for us to celebrate and see the film do wonders at box office. The best response is the one we can give to someone through the work we do. This time I am excited about the box office because it is going to be earth shattering,' 'Padmaavat', which was embroiled in a controversy over its content, has been cleared by CBFC with a U/A release certificate post the incorporation of only 5 modifications. The film is releasing in Hindi, Tamil and Telugu.The film will witness a mega-scale release across maximum screens, languages and formats covering 2D, 3D & Imax 3D in India and the world.