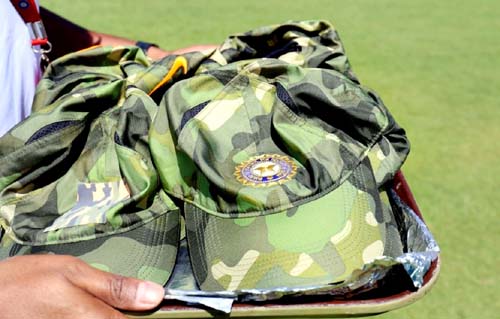 Islamabad, Pakistan on Saturday urged the International Cricket Council (ICC) to take notice of the Indian team wearing military caps during the third One Day International (ODI) against Australia. Indian team had wore military caps during 3rd One-Day International against Australia in Ranchi on Friday, to show solidarity for the Pulwama terror attack martyred soldiers. Caption Virat Kohli proudly announced after the toss that the team would be wearing the military caps to signal support for Indian soldiers. The BCCI tweeted on Friday - #TeamIndia will be sporting camouflage caps today as mark of tribute to the loss of lives in Pulwama terror attack and the armed forces. And to encourage countrymen to donate to the National Defence Fund for taking care of the education of the dependents of the martyrs #JaiHind Pakistan Foreign Minister Shah Mehmood Qureshi, while speaking to media in Sukkur, said, "The world saw that the Indian cricket team wore military caps instead of their own, did ICC not see this? We think that it is the ICC's responsibility to take notice of this without the Pakistan Cricket Board (PCB) bringing it up."