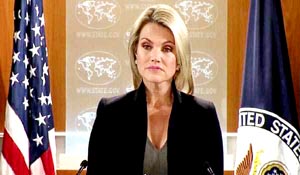 Washington, The United States has taken note of the election results in Pakistan and has commended the courage of the Pakistani people, including many women, who turned out to vote and showed resolve to determine their country’s future. According to a press statement issued here on Friday by Ms Heather Nauert, Department Spokesperson, the US at the same time has condemned the horrific acts of terrorist violence that marred this process, including the latest attack outside a polling station in Quetta on election day. "We offer our deepest condolences to the victims and their families, and wish a speedy recovery to those injured," the statement said. "The development of strong democratic and civilian institutions of governance and a vibrant civil society is critical to Pakistan’s long-term stability and prosperity. In that context, the United States shares concerns about flaws in the pre-voting electoral process, as expressed by the Human Rights Commission of Pakistan. "These included constraints placed on freedoms of expression and association during the campaign period that were at odds with Pakistani authorities’ stated goal of a fully fair and transparent election. The United States concurs with the conclusions of the European Union Election Observation Mission, whose report notes that while there were positive changes to the legal framework for elections in Pakistan, these were overshadowed by restrictions on freedom of expression and unequal campaign opportunities. "The United States also has deep reservations over the participation of terrorist-affiliated individuals in the elections, but we commend Pakistani voters for fully rejecting these candidates at the ballot box on Wednesday, according to her. "Along with our international partners, the United States will continue to encourage a broadening of opportunities for political participation for all Pakistanis, and for the further strengthening of legitimate, democratic institutions. As Pakistan’s elected leaders form a new government, the United States will look for opportunities to work with them to advance our goals of security, stability, and prosperity in South Asia," the statement added.