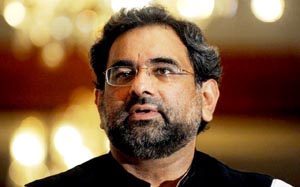 Agencies, Islamabad, A Pakistani election tribunal disqualified outgoing Prime Minister Shahid Khaqan Abbasi from running in his home constituency, dealing the latest blow to the party of ousted leader Nawaz Sharif. The surprise barring of Abbasi applies only to the constituency of Murree, and not the separate Islamabad seat in which he is also standing in the July 25 election. However, with four weeks until the vote he could still face new challenges. The ruling follows the arrest by an anti-corruption body of another member of Sharif’s Pakistan Muslim League-Nawaz (PML-N) after he was named to contest a seat. In the case of Abbasi, an election commission tribunal ruled that he did not declare an accurate value of his assets in his nomination papers. Abbasi denied the charges and termed the decision illegal, saying he will appeal against the ban. “I declared an actual value of my property at the rate which my father bought it in 1974,” he told local TV channels. “It is an election for the parliament. They have made it a joke.” Abbasi was named prime minister last year after the Supreme Court disqualified then-premier Sharif, who had served twice as prime minister before and was ousted both times. Since his removal, Sharif has been arguing that the Pakistani military establishment, aided by top members of the judiciary, backed a series of decisions which banned him from politics for life. Sharif has a history of differences with the military, which has ruled the nuclear-armed country for almost half of its history. In his third term, Sharif and the military clashed over differences over handling Islamist militants and his desire to mend diplomatic ties with arch-rival India. Sharif is separately facing criminal charges in an anti-corruption court that could see him jailed in the coming weeks. The anti-graft body has also approved a fresh inquiry into both Abbasi and Sharif over a liquefied natural gas (LNG) terminal project. Sharif and his party have termed the cases and other several measures as a pre-election attempt to tip the scales in favour of pro-military opposition politician Imran Khan. On Monday, another PML-N candidate, Qamarul Islam, was arrested on orders of the National Accountability Bureau over accusations he awarded government water contracts at over the market price. Former premier Abbasi was among the PML-N leaders who decried the arrest of Islam as bias ahead of the election.