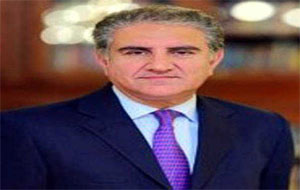 Agencies, Islamabad Pakistan Foreign Minister Shah Mahmood Qureshi has once again refuted India's claim that Pakistan was complicit in the Pulwama attack. "Pulwama incident has nothing to do with Pakistan and now world community has also acknowledged this fact." Qureshi said in an interview to a private news channel. Conveying his nation's readiness to engage in a dialogue with India, Mr Qureshi said, "Dialogue is the only way forward to sort out all outstanding issues between Pakistan and India in the best interest of the region." Islamabad has only one stance which is maintenance of peace and stability in the region as war is not solution to any problem, he added. In February, at least 40 Central Reserve Police Force (CRPF) personnel were martyred in a fidayeen attack by Pakistan based Jaish-e-Mohammad (JeM) terrorist outfit at Awantipora in south Kashmir district of Pulwama on Srinagar-Jammu national highway. The attack immediately drew international condemnation and the US, France, Russia, Sri Lanka, Nepal, Bhutan and the Maldives were among the first to slam the attack while Pakistan had termed it a matter of 'grave concern'. The Indian government had also "strongly reiterated" its appeal to all members of the international community to support the proposal to list terrorists, including JeM chief Masood Azhar, as a designated terrorist under the 1267 Sanctions Committee of the UN Security Council and to ban terrorist organisations operating from territories controlled by Pakistan. On May 1, United Nations designated Azhar as a "global terrorist" after China lifted its hold on a proposal to blacklist him. This was termed as a huge diplomatic win for India.