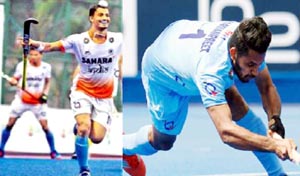 Gold Coast, Pakistan who were trailing India 0-2 after the first half, scored twice to hold India 2-2 in the hockey opener at the Commonwealth Games here on Saturday. Dilpreet Singh scored in the first quarter while Harmanpreet Singh converted a penalty corner in the second to give Indian men’s hockey team a 2-0 lead after the first half. Pakistan stepped up the tempo in the second half even as Indians lost their shape in the middle. They made it 1-2 via a strike from Muhammad Irfan Jr before Ali Mubashar scored the equaliser when Pakistan were awarded a penalty corner with just seven seconds before the match end.