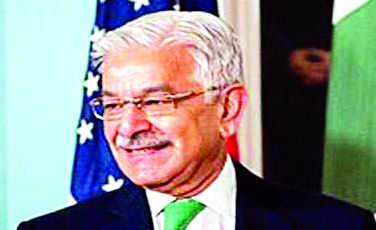 Islamabad: Pakistan Foreign Minister has said that Islamabad will never compromise its national security, integrity and dignity. Talking to media outside Parliament on Wednesday, Mr Asif has emphatically stated that Pakistan’s relations with the US are not at par and that there’s still friction between the two nations. ‘We wish to have a balance in relationship with the US,’ the Minister was quoted as saying by Radio Pakistan. Mr Asif maintained, ‘We have conveyed our message to the US military and political administration saying Pakistan does not want any aid and will not compromise over its national interests. The US must stop putting the blame of its own failures on Pakistan.’