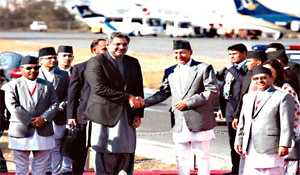 Agencies, Kathmandu Heading a 32-member delegation, Pakistani Prime Minister Shahid Khaqan Abbasi arrived here on Monday on a two-day visit that is aimed at taking the stalled SAARC process forward. He was welcomed at the Tribhuvan International Airport by Finance Minister Yuvaraj Khatiwada. It will be Abbasi’s first interaction with the new Nepalese leadership. In Islamabad, Pakistan’s Foreign Office in a statement said, “Prime Minister’s visit will provide an opportunity to further expand and strengthen bilateral relations across all areas of mutual interest including trade, education, tourism, defence and people to people contacts. “Ways of invigorating SAARC as an important regional organization will also be discussed.”Local media in Nepal said the news of Abbasi’s visit surprised many in Kathmandu, including some senior government officials. Many also believe that information about the visit was kept under wraps. Prime Minister Khadga Prasad Sharma Oli heads the foreign affairs ministry.Rajan Bhattarai, an aide to Oli, said the visit was planned in a short time and showed Pakistan’s eagerness to strengthen bilateral ties with Nepal. The two countries are yet to release details of the visit, but senior government officials said the sole purpose of Abbasi’s visit is to expedite the Saarc process that has been stalled for two years and strengthen bilateral ties between Nepal and Pakistan. Pakistan seeking to host the summit of the South Asian Association for Regional Cooperation at the earliest in consultation with Nepal, the current chair of the regional grouping. “Nepal is the current chair of the SAARC and Nepal’s role is crucial for taking the stalled SAARC process forward,” The Kathmandu Post quoted officials as saying. Abbasi is likely to seek Oli’s backing for hosting the Saarc summit in Islamabad. The summit was to be held in 2016 but India refused to attend after the attack on the Idian army base in Uri. Nepal and three other South Asian countries followed suit, referring to Pakistan’s role in fomenting terrorism in the region. Pakistan was forced to postpone the summit. Beside Oli, Abbasi will meet President Bidya Devi Bhandari and leaders of various political parties during his two-day stay in Nepal. Though the officials did not confirm, it is said that the Pakistani side would discuss during the visit the matter of Lt Col Mohammed Habib Zahir, who went missing from Lumbini in April 2017. According to the Pakistani media reports, the former Pakistani army officer was offered a lucrative job in Nepal and had some contracts with foreign organisations working in Nepal. After confirmation of his job and contract, he first landed in Kathmandu and then went to Lumbini as per instruction but vanished as soon as he came out of the Bhairahawa airport. Resuming bilateral flights between Nepal and Pakistan, suspended some years back, and matters related to other bilateral issues will be discussed, said officials.