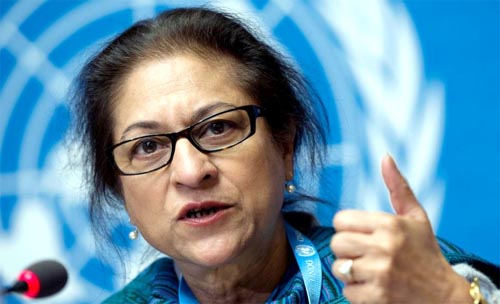 United Nations, Late Pakistani human rights lawyer Asma Jahangir has posthumously been awarded the UN Human Rights Prize 2018 on Monday at a ceremony at UN Headquarters in New York. The prize was awarded to Jahangir, who passed away on February 11 after suffering a stroke at the age of 66. Asma’s daughter Munizae Jahangir accepted the award. UN Human rights twitter account posted " Many remember Pakistani lawyer Asma Jahangir as “a giant” in the global human rights movement. Learn about her fearless contributions to #humanrights & why she’s one of this year’s UN Human Rights Prize winners: #StandUp4HumanRights. President of the UNGA María Fernanda Espinosa Garcés also congratulated Jahangir and the other three recipients of this year’s award on Twitter. “Warmest congratulations to the 2018 winners of the UN Human Rights Prize. Rebeca Gyumi, Asma Jahangir Joênia Wapichana and FrontLineHRD. Your work inspires us all.” A large number of diplomats, human rights activists and senior UN officials attended the ceremony. This year’s other three winners include Rebeca Gyumi, a Tanzanian activist for the rights of women and girls; Joenia Wapixana (Joenia Batista de Carvalho), an activist for indigenous communities in Brazil; and the Irish organisation, Front Line Defenders, which advocates and works for the protection of human rights defenders, reports The Express Tribune and The Nation. The Human Rights Prize is awarded every five years, in accordance with a resolution of the General Assembly that was adopted in 1966.This is the tenth award of the prize, coinciding this year with the 70th anniversary of the Universal Declaration of Human Rights. Asma Jahangir first came to the limelight when as an 18-year-old in 1971 she filed a petition in the courts to challenge the arrest of her father Malik Ghulam Jilani by Pakistan’s dictator at the time General Yahya Khan. Resulting in a landmark judgment, the Supreme Court declared martial law illegal and Yahya Khan an usurper. From 1998-2000, Jahangir served as the special rapporteur of the UN Commission on Extrajudicial, Summary and Arbitrary Executions and was the special rapporteur on freedom of religion or belief of the UN Commission on Human Rights since 2004.