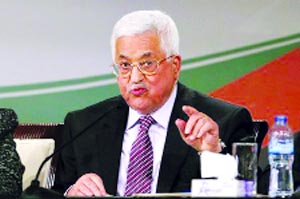 Agencies, Ramallah Palestinian President Mahmoud Abbas on Monday called the U.S. ambassador to Israel a “son of a dog” because of his support for Israeli settlers in the occupied West Bank. Abbas, speaking at a Palestinian leadership gathering, also blamed Hamas for a bomb attack last week on the convoy of Palestinian Prime Minister Rami Hamdallah in Gaza, remarks that threatened reconciliation efforts with the Islamist group. The Palestinian leader accused Ambassador David Friedman of defending Israeli settlers in the West Bank by saying that they were building on “their land”. The slur drew rebukes from the diplomat and Israeli Prime Minister Benjamin Netanyahu. In an angry tone, Abbas said: “The son of dog says they build on their land? He is a settler, and his family are settlers, and he is the U.S. ambassador in Tel Aviv. What should we expect from him?” Friedman, a strong supporter of Israel’s settler movement, was an early and enthusiastic advocate of U.S. President Donald Trump’s Dec. 6 decision to recognise Jerusalem as Israel’s capital and to move the U.S. embassy there. Friedman responded during a speech in Jerusalem to a conference on combating global anti-Semitism, saying: “His response was to refer to me as son of a dog. Anti-Semitism or political discourse? Not for me to judge, I leave that all up to you.” U.S. Middle East envoy Jason Greenblatt issued a statement calling Abbas’ comment “highly inappropriate.” He said the Palestinian leader needed “to choose between hateful rhetoric and concrete and practical efforts to improve the quality of life of his people.” Trump’s announcement on Jerusalem delighted the Israeli government but infuriated Palestinians, who have staged regular protests since then. Israel regards Jerusalem as its eternal and indivisible capital, although that is not recognised internationally. Palestinians feel equally strongly, saying that East Jerusalem must be the capital of a future Palestinian state. Peace talks aimed at finding a two-state solution to the Israel-Palestinian conflict have stalled, while Israeli settlement expansion has continued. Netanyahu said Trump’s decisions on Jerusalem appeared to have brought Abbas to the point of making a verbal attacks on a U.S. official. “For the first time in decades, the U.S. administration has stopped spoiling the Palestinian leaders and tells them: enough is enough,” Netanyahu said on Twitter.