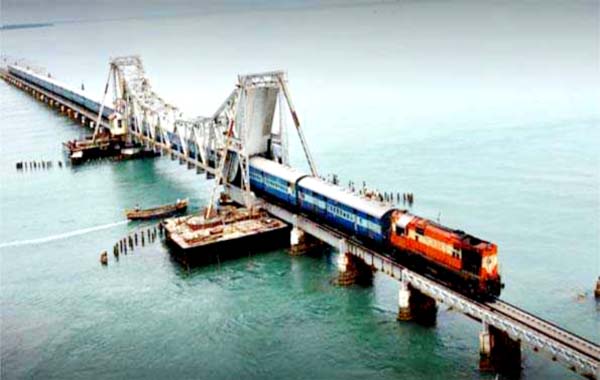 New Delhi, Railway Ministry on Monday announced a new year bonanza in the form of an estimated Rs 250 crore new bridge with vertical lift span technology which will replace 104-year-old Pamban structure in Tamil Nadu. A cyclone in 1964 destroyed Rameshwaram to Dhanush Kodi rail stretch and since then it remained unattended. Dhanushkodi was well connected with Pamban pre-cyclone. Pamban railway trestle, which connects the town of Rameswaram on Pamban Island to mainland India, used to be the largest bridge on sea link before the construction of the Baroda-Worli connection. The new bridge, which will be built just parallel to the existing one, will have the first vertical lift span in India, official sources said here. There are 145 spans of 12.20 metres and one navigational tie of 61 metres. The navigational span is also known as Scherzer rolling lift connection after the railroad engineer who invented it. The existing Scherzer tie uses diesel but the new one with vertical lift span will be an automatic electricity operated one which will be 63 metres long.Because of vertical lift, full horizontal width of 63 metres will be available for navigation. Substructure of the bridge will be built for double line. And the navigational span will also have provision for double line. Entire bridge, including navigational span, will be designed keeping in mind the Railways plan of electrification. In comparison to existing manual operation and control, the new bridge will have electro mechanical controlled systems which will be interlocked with train control systems, the sources added. Vertical lift technology will also enable two ships to cross at a time as it will now rise 19 metres above sea level, three metres higher than the previous bridge. The new rail bridge will have stainless steel rods which are less prone to corrosion in the sea. Sleepers will be made of ‘composite’(made of many metals together) which is corrosion-free. From January, the process of construction of the bridge will set in motion and it will be ready in four-five years.