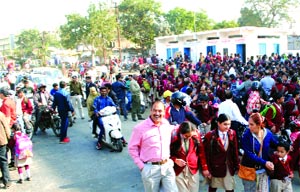 School buses, vans would be back on roads today

Chronicle Reporter, Bhopal Following the withdrawal of the strike by the school bus and van operators, the school vehicles would be back on roads on Thursday. Earlier on Wednesday, the parents and guardians had to face lot of hardship to drop children at schools and bring them back from schools. Protesting against the crackdown by police and administration in the wake of Indore bus mishap on January 5 that left four children and driver dead, school bus and van operators today launched an indefinite strike in Bhopal. The district administration had directed school bus operators to produce character verification during inspection. Bus and van operators alleged that their vehicles are being confiscated at police stations when they go for character verification. Besides, vehicle operators said that the online police verification is beyond their comprehension. Though the administration has agreed to provide them necessary facilities and adequate time for the purpose, operators said they were not ready for it. Meanwhile, Additional District Magistrate Disha Nagvanshi said that school vehicle operators have been told that immediate character verification is not required from them. “We have given them a seven days’ deadline. The Regional Transport Office is cooperating with them and a separate window has been opened for the purpose. The administration would not buckle under illegitimate demands related to security of children,” she said. Several schools in the state capital today announced a holiday due to strike by bus and van operators. On the other hand, several parents accompanied their children at other schools. Parents had a tough time managing their wards to send and bring back them from schools. After talks with the district officials later in the evening, president of the School Bus Operators Association Shiv Kumar Soni confirmed that the strike had been called off as district administration has promised solutions to their problems. Soni said that district administration has given them a months’ time to complete other requirements like speed governor and CCTV. District administration and State Commission for Protection of Child Rights have taken cognizance of the schools that remained closed due the strike of school buses and vans.