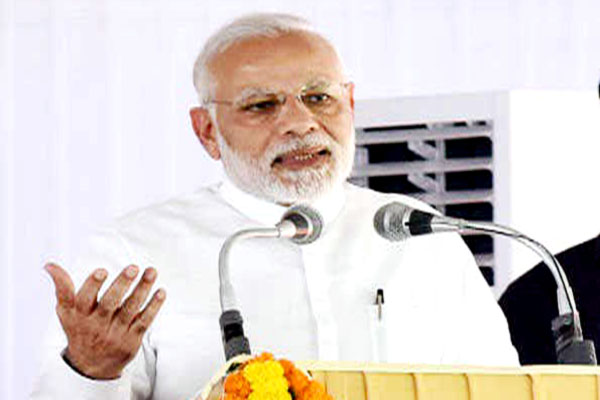 New Delhi, Prime Minister Narendra Modi on Wednesday said his government is walking on the path shown by Dr BR Ambedkar and working for the poorest of the poor in the country. Inauguration of the new building of Western Court Annexe in New Delhi, he said, “harmony and togetherness are at the core of Dr Ambedkar's ideals but the political parties want to play politics in the name of Dr Ambedkar. The NDA Government, however, is going forward with his vision,’’ Prime Minister added. Remembering Babasaheb Ambedkar, he said, "there are two places in Delhi, which are associated with Dr Ambedkar on whom the then Atal Bihari Vajpayee Government had made crucial decisions. ‘‘It was our government that got the opportunity to work on them and pay tributes to Dr Ambedkar.’’ Mr Modi added. “We are walking on the path shown by Dr Babasaheb Ambedkar. At the core of Dr Ambedkar's ideals is harmony and togetherness. Working for the poorest of the poor is our mission,” he added further. Congratulating the LS Speaker Sumitra Mahajan for the step, Modi said, “Usually, work of Speaker is seen in the context of her presiding over the House. However, what we are marking through this programme shows the compassionate nature of Speaker Sumitra Mahajan Ji. She is always thinking about the well-being of the MPs.” The center government will inaugurate Ambedkar Memorial at Alipur in Delhi on the 13th of this month.