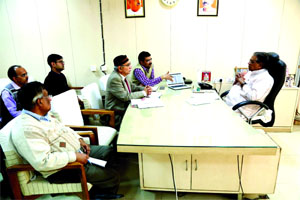 Chronicle Reporter, Bhopal Patwaris who wish to change to another district can apply online between February 10 and 20. They will have to mention three districts as per their priority. Revenue, Science and Technology Minister Umashankar Gupta said that patwaris will be posted in the districts of their choice. Gupta was reviewing departmental schemes at the Mantralaya. Gupta said that the training of newly recruited patwaris will be started from April after counseling. He said that the list of retired revenue officials should be made first and then training should be given. Fund for purchase of mobile before February 10 should be made available to the patwaris and no fund should be made available later.Revenue Minister directed to relieve all tehsildars and other officers/employees. He told to suspend those who do not join the scheduled office after being relieved.

Gupta directed to make the Girdawari app soon to facilitate farmers. Through this app the farmers will be able to register complete information related to their crop online so that they need not have to go after patwaris to get their work done. Gupta directed to get the maps of villages without maps made soon. Commissioner Land Records M. Selvendran told about Electronic Total Station (ETS) machines. He said that with the help of these machines, all demarcation cases will be settled with ease and on time. Selvendran said that the newly appointed patwaris will be trained according to the new course in all districts. They will be provided 4 months training in principle and practical training for two months.

Government printing press should take up work as per capacity

Revenue Minister said that the Government Printing Press should take up work only as per its capacity. Moreover, it should accept work after taking 50 per cent payment in advance before starting work. He issued instructions to install CCTV cameras in the whole Press. Gupta told to provide information about the works undertaken in all printing presses. He said that important posts should be filled through contracts and other posts should be surrendered. Principal Secretary Revenue Arun Pandey and Hariranjan Rao, Controller Government Printing Press Rajesh Kaul, Secretary Revenue Rajendra Singh and other officers were present.