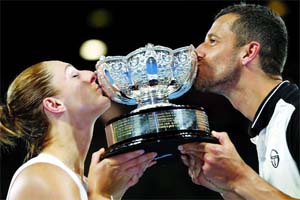 Agencies, Melbourne Croatia’s Mate Pavic and Canada’s Gabriela Dabrowski beat India’s Rohan Bopanna and Timea Babos of Hungary 2-6 6-4 (11-9) to win the Australian Open mixed doubles title on Sunday. Pavic and Dabrowski saved a championship point before closing out the match tiebreak under a closed roof at Rod Laver Arena. It was Pavic’s second title of the tournament after winning the men’s doubles title with Austrian Oliver Marach. “It feels pretty good, I have to say,” Pavic said of his two titles. “I did not imagine that I’m able to do that. If somebody would have told me, I wouldn’t believe him.”