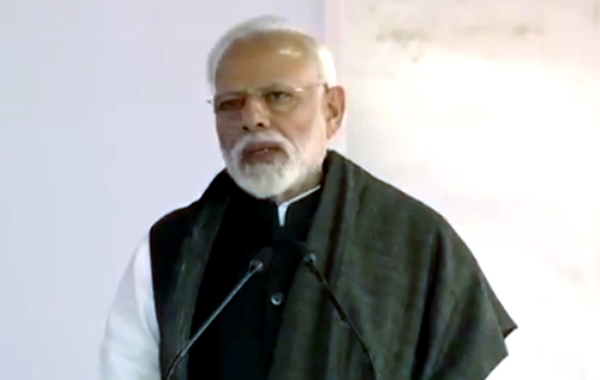 New Delhi, Prime Minister Narendra Modi on Friday said that perpetrators of Pulwama attack have committed a huge blunder and will have to pay a heavy price for it. "I want to say to the terror organisations and their supporters that they have committed a huge blunder. They will be made to pay a huge price," the Prime Minister said on the occasion of flagging off the country's first semi-high speed trainset Train 18, titled the Vande Bharat Express, from New Delhi Railway station. "Hamari suraksha balon ko purna swatantrata de di gayi hai (At this time, the country's anguish and expectation for action is understandable. It is natural Our security forces have been given complete freedom and freehand)," Mr Modi said. "I want to assure the country that the powers behind this attack, the perpetrators of this attack will definitely pay for their crimes," he said. The Prime Minister said he understands the sentiments of those who are attacking his government for the gruesome incident. "But I will like to urge all that the country is passing through a testing time. Either in ruling side or in opposition we all should stay away from the political blame game," Mr Modi said. "The entire country is united against this act of terror. We all have one voice and this ought to be made known to all including to the international community," he said. "This is a war we are fighting to win. If our neighbour, who has been isolated around the world, thinks that by this kind of acts it is perpetrating and plotting conspiracies, and it will succeed in creating a divisive atmosphere in India; it must give up such dreams altogether," the Prime Minister asserted. "Its nefarious designs will never succeed," he said. "Right now, our neighbour who is going through major economic distress thinks that by causing such damage it can destabilise India.... . it will never succeed," he said. Mr Modi pointed out that time has proved time and again that the path on which they have been walking has met with destruction and that which India has taken has led us towards progress. "One thirty crore Indians will give a befitting response to every such conspiracy," he said. The strong remarks came from the Prime Minister after he presided over a meeting of Cabinet Committee on Security with senior ministerial colleagues and other top security officials. Earlier, senior Minister Arun Jaitley said at the CCS meeting it was decided that "as far as Indian security forces are concerned, they will be taking all possible steps firstly to ensure that full security is maintained and secondly to ensure that those who have committed this heinous act of terrorism and those who have supported it actively are made to pay a heavy cost for it".