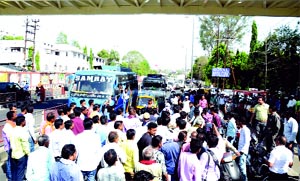 Demo organized at collectorate to protest against incident

Chronicle Reporter, Bhopal A photographer was killed after he was allegedly shot during celebratory firing at a wedding in the city, police said on Thursday. Sourabh Meena (34) was clicking pictures of the wedding party when he was hit by a bullet outside Natraj Community Hall in Govindpura area here late Wednesday night, inspector Satendra Singh of the local police station said. He was rushed to a nearby hospital where doctors pronounced him dead on arrival, Singh said. “We have arrested one Purshottam Tiwari under section 304 of IPC (culpable homicide not amounting to murder) for accidentally firing at Meena,” he said, adding that further investigation was on. The mishap took place when the ritual of ‘dwarachar’ was being performed. There were hundreds of people inside the hall when the firing took place. After the tragedy, most of the people left without having the dinner. Bride Anuradha belongs to Sidhi. The marriage procession reached the marriage hall at about 10 pm and was welcomed by the people of bride’s side. Just then someone made a celebratory firing that killed Saurabh who was doing videography of the incident. Later in the day a demonstration was organized at the Collectorate to protest against the incident. Large number of people participated in the demo and demanded action against those responsible for the tragic incident. The demo led to disruption of the traffic in the area. Later the police somehow brought the situation control by assuring the agitators that stringent action would be taken against the accused person.

The Govindpura police have booked an employee of a construction company who escaped with Rs 5.53 lakh cash of the company on Tuesday. A complaint was lodged with the Govindpura police by an employee Jyoti Sharma of the Trishul Infrastructure Company at Kasturba Nagar regarding Ramesh Jadhav who escaped with cash meant to be deposited in the bank on Tuesday. The accused used to work with the company for the past two years and would deposit the money within an hour or two but on Tuesday he failed to return for long and later when he was contacted his mobile phone was found to be switched off. The company employees tried to search for the accused but failed to find him and later lodged a complaint with the Govindpura police. Police found in the investigation that the accused used to live in a rented room at Kailash Nagar and hailed from Maharashtra. He used to work as office assistant and was working for the past two years. In the afternoon on Tuesday he was handed over Rs 5.53 lakh cash which was scheduled to be deposited at Central Bank of India TT Nagar branch but he never reached the bank and later it was found that he escaped with the money. Police said that other employees of the company would be questioned and mobile number of the accused would be investigated.