Plan to set up 10 offices abroad to promote export: Prabhu 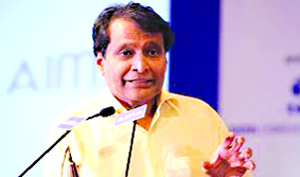 Agencies, New Delhi, Commerce and Industry Minister Suresh Prabhu on Friday said the government will soon open 10 offices in Indian Missions abroad for accelerating export promotion activities. “The Department of Commerce will soon open10 offices in Indian missions abroad for accelerating export promotion activities,” Mr Prabhu said, while reviewing sectoral export promotion plans of ministries and departments here . He said a conference of Heads of Indian missions has been scheduled in June end in which trade promotion measures will be discussed. Mr Prabhu stressed on branding of Indian products and export credit as important focus areas for export promotion. He also said that efforts should be made for getting priority sector lending status for export credit. He directed the logistics division of the Ministry to work upon measures like bulk cargo transportation to reduce freight costs. The Minister suggested that each Ministry and Department should set targets for increasing exports of their product and product groups in 2018-2019. Commerce Minister emphasised that exports are a national priority and an integrated approach is required to promote exports as a joint mission. He directed that this forum should be institutionalized and inter-ministerial meetings be held every quarter to resolve difficulties and assess the progress across sectors. Commerce Secretary, Ms. Rita Teaotia said that although exports have grown in the past year, a quantum jump is required. She also emphasized that branding is a major issue cutting across all sectors and Brand Equity Foundation is formulating a proposal to support line Ministries for branding export products. Director General Foreign Trade, Alok Chaturvedi informed the participants that Department of Commerce is preparing a ‘100 Billion Additional Export Strategy’ which will be released shortly. The Minister of State for Commerce & Industry, C R Chaudhary was also present at the meeting. The meeting was attended by Secretaries to Government of India from DIPP, MSME, Textiles, Chemicals and Petrochemicals besides senior officers from other administrative ministries and departments including Agriculture, Electronics and IT, Department of Heavy Industry and Defence Production. Merchandise exports in 2017-18 grew by 9.8 per cent YoY while services exports were up by 17.8 per cent YoY. Total Exports were up by 12.9 per cent in 2017-18 as compared to 2016-17.