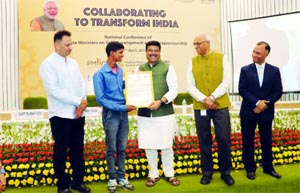 Agencies, New Delhi Skill Development and Entrepreneurship Minister Dharmendra Pradhan on Friday said efforts were on to set up at least one Industrial Training Institute (ITI) in each block of the country by the end of 2018. “Industrial Training Institutes played a vital role in economic development of the country, especially in terms of supplying skilled manpower to industries.It is our endeavour to establish at least one ITI in each block of the country by end of 2018”, Mr Pradhan said. Launching an array of initiatives at a day-long State Skill Development Ministers’ Conference here, Mr Pradhan stressed on the need for strengthening institutional mechanisms for skill development at the State level and bringing in a more robust framework. Addressing the State representatives, he said, vocational Training was a concurrent subject and thus it is imperative that Centre and State governments work closely to ensure a paradigm shift in addressing the issues relevant to skill development and identify the gaps in skill development, so as to achieve the objectives in terms of quantity, quality, outreach, and mobility. “The States should align themselves to reforms being done to our central initiatives like Pradhan Mantri Kaushal VikasYojana (PMKVY), Pradhan Mantri Kaushal Kendras (PMKK), Recognition of Prior Learning (RPL) and National Apprenticeship Promotion Scheme (NAPS),” Mr Pradhan said. During the conference, launch of new courses for ITIs were also announced by the Minister. The new courses are an endeavour to promote emerging skill in areas such as Artificial Intelligence, Virtual Reality, Robotic Process Automation, Internet of Things, Robotics, Big Data Analytics, 3D Printing. An MOU was also signed between Director General of Training (DGT) & National Association of Software Services Companies (NASSCOM) for enabling Skill Development & Continuous learning for ITI trainees & trainers. Recognising the concurrent nature of Ministry of Skill Development and Entrepreneurship (MSDE), the conference marked the launch of new Affiliation Norms 2018 for ITIs. Affiliation Norms 2018 aims at establishing high quality Institutions for Skill Training in all parts of the country especially the un-served blocks. To ensure transparency in the affiliation process, a Portal has also been designed and was launched at the event. The portal has a three-stage process which simplifies the overall affiliation process. MSDE also announced a Self-Grading exercise for ITIs to provide “Star Rating” to each institute,to ensure quality assessment of ITI and a healthy competition between them.