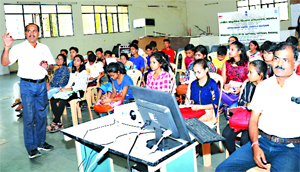 Chronicle Reporter, Bhopal Plastic cannot be recycled easily and it is the major cause of the harm it causes to our environment.Lectures on ‘Plastic pollution and its harmful effect on mammals’ and ‘Effect of plastic pollution on state’s biodiversity’ were organized at Regional Museum of Natural History. Programme convener and Scientist-B Manik Lal Gupta said plastic pollutes air, water and soil. He said as the world’s population continues to grow, so does the amount of garbage that people produce. On-the-go lifestyles require easily disposable products, such as soda cans or bottles of water, but the accumulation of these products has led to increasing amounts of plastic pollution around the world. As plastic is composed of major toxic pollutants, it has the potential to cause great harm to the environment in the form of air, water and land pollution. He said put simply, plastic pollution is when plastic has gathered in an area and has begun to negatively impact the natural environment and create problems for plants, wildlife and even human population. Often this includes killing plant life and posing dangers to local animals. Plastic is a useful material, but it is also made from toxic compounds known to cause illness, and because it is meant for durability, it is not biodegradable. He said next time you go for a shopping, don’t forget to carry a paper or cloth bag. Also, try to avoid bringing plastic bags at home and purchasing items with too much of packaging. This way we can help in contributing towards the environment in the form of reducing plastic pollution whose ill effects are irreversible. Ill effects of plastic explained Manik Lal Gupta said plastic is everywhere, even on those items you may not expect it to be. Milk cartons are lined with plastic, water bottles are handed out everywhere,and some products may even contain tiny plastic beads. Every time one of these items gets thrown away or washed down a sink, the toxic pollutants have more of a chance to enter the environment and do harm. Trash dumps and landfills are unfortunate major problems, as they allow pollutants to enter the ground and affect wildlife and groundwater for years to come. As plastic is less expensive, it is one of the most widely available and overused item in the world today. When disposed, it does not decompose easily and pollutes the land or air nearby when burned in the open air, he said.