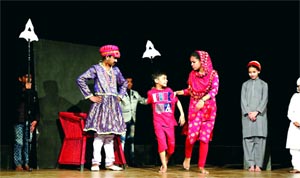 Chronicle Reporter, Bhopal A Hindi play ‘Akbar Birbal and Gadhon ki Jamat’ was splendidly performed at Madhya Pradesh State Tribal Museum on Friday. The play was performed under the regular series of dramas ‘Abhinayan’ organised every Friday. The play was directed by Rajesh Kumar Kurmi and was staged in the Museum Auditorium by the artists of Maa Maaya Welfare and Culture Society, Bhopal. The story of drama begins with Akbar’s court. Where Birbal makes a special place in the court on the basis of his intelligence, but all other courts are jealous of Birbal and they complain about Birbal from Akbar. One day, Akbar orders Birbal to go and come with 10 donkeys and prove that what is the difference between donkeys and people who behave like donkeys? Birbal comes out to catch the donkeys, but when he come back and bring some people to the place of donkeys with him, then all the court ministers joke about Birbal. Birbal then explains everything in detail that how a girl was filtering water, when asked what she was doing, she says that she is filtering the thick water. A boy was cutting the same tree trunk over which he was sitting. A boy was digging a pit under his mother’s feet and says he is looking for a paradise. He describes many such incidents in the court and explains the difference between people who acts like donkeys and donkeys and all the court ministers praise the wisdom of Birbal. Written by Abdul Haq, the play “Akbar-Birbal aur gadhon ki jamat” is a humorous drama of about one hour.In this play, the proverbs were played as the background dialogues which made the play even more interesting. This drama also highlights about the injustice done to children in society.