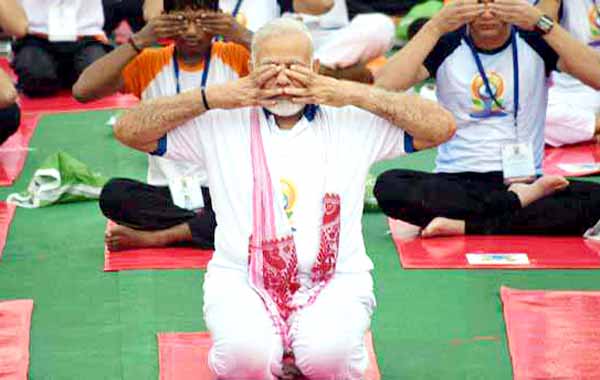 New Delhi, Accepting cricket star Virat Kohli's fitness challenge, Prime Minister Narendra Modi on Wednesday released a video of himself undertaking Yoga and other exercises. In a series of tweets, the Prime Minister appealed "to every Indian" to devote some part of the day towards fitness. "Here are moments from my morning exercises. Apart from Yoga, I walk on a track inspired by the Panchtatvas or 5 elements of nature - Prithvi, Jal, Agni, Vayu, Aakash. This is extremely refreshing and rejuvenating. I also practice breathing exercises. #HumFitTohIndiaFit," he wrote. The Prime Minister advised the citizens to "Practice any set of exercises you are comfortable with and you will see the positive difference it will make in your life!" Mr Modi also nominated Karnataka Chief Minister H D Kumaraswamy among others for the 'Fitness Challenge'. "I am delighted to nominate the following for the #FitnessChallenge: Karnataka’s CM Shri @hd_kumaraswamy. India’s pride and among the highest medal winners for India in the 2018 CWG, @manikabatra_TT. The entire fraternity of brave IPS officers, especially those above 40," he wrote in the micro blogging site. The Union Sports minister Rajyavardhan Singh Rathore’s had thrown up #HumFitTohIndiaFit campaign and had urged citizens to shoot a video of their “fitness mantra” and share it. On May 23, Indian cricket team skipper Virat Kohli took the campaign forward and gave a fitness challenge to Prime Minister Narendra Modi, star cricketer MS Dhoni, and his actress wife Anushka Sharma.