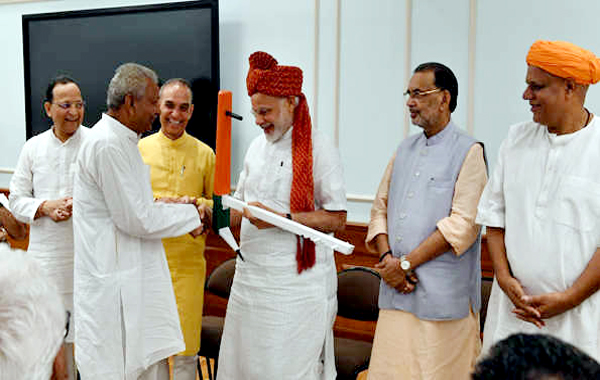 New Delhi, Prime Minister Narendra Modi on Friday said that to give a significant boost to the income of farmers, the Union Cabinet in its next meeting will approve the implementation of Minimum Support Price (MSP) of 150 per cent of input cost for notified crops for the 2018-19 kharif marketing season. He also announced that within the next two weeks the Fair and Remunerative Price (FRP) of sugarcane for 2018-19 will be declared, which will be higher than last year. It will provide incentive for those farmers whose recovery from sugarcane will be higher than 9.5 per cent, he told 140 representatives of sugarcane growers while interacting with them at his Lok Kalyan Marg residence here. Assuring the farmers that States had been requested to take effective measures to liquidate sugarcane arrears, he said that already owing to government’s policy initiatives (relief package for millers) payment of Rs 4,000 crore have been made to farmers in the last seven to ten days alone. Sugarcane arrears before that stood at Rs 22,000 crore. The Prime Minister also recalled the earlier interventions made by the Union Government in 2014-15 and 2015-16, to ease the burden of sugarcane farmers, who were then struggling under a huge amount of arrears worth more than Rs 21,000 crore. The payment was ensured through sugar mills to farmers. During the interaction, Mr Modi exhorted farmers to use sprinkler and drip irrigation, latest farming techniques, and solar pumps. He urged them to install solar panels in their farms as a source of power, as well as for additional income and called for emphasis on value addition of crops. Mr Modi also urged them to use farm waste judiciously, as a source of nutrients and for additional income and asked them to aim for up to 10 per cent reduction in chemical fertilizers by 2022. The Prime Minister apprised farmers of his recent interactions with corporates, wherein he called for greater private sector investment for value addition, warehousing, storage facilities, better quality seeds, and market linkages for improving farmers income. According to official sources, the farmers thanked the Prime Minister, for the increase in import duty on sugar from 50 per cent to 100 per cent and the provision of Rs 5.50 per quintal as performance based grant to sugar mills for payments to farmers, amounting to Rs 1,540 crore. The farm leaders also noted the government intervention to the tune of Rs 1,175 crore as interest subvention support for 30 lakh metric tonnes of buffer stock by mills, to enable payment to farmers. The Prime Minister apprised them of the government’s approach for 10 per cent blending of ethanol in petrol, as a long-term solution for providing stability in the sugar sector.