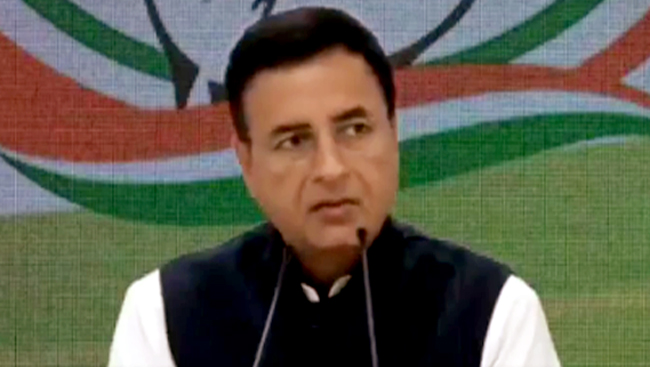 New Delhi, In its fiercest attack on Prime Minister Narendra Modi and the BJP since the February 14 Pulwama terror attacks, the Congress on Thursday charged the PM and the BJP leaders of mocking the sacrifice of martyrs. The party asked the PM to take responsibility on the attacks for failing to act on the intelligence inputs warning of a Jaish-e-Mohammed attack. Addressing a press conference here, AICC, media incharge Randeep Surjewala accused the prime minister of being busy shooting a film in Jim Corbett National Park in Uttarakhand when the whole country was mourning the loss of lives of jawans in Pulwama Attack in the afternoon. "It is shocking that when the whole country was mourning the loss of lives of our jawans in Pulwama attack in the afternoon, PM Narendra Modi was busy shooting for a film in Jim Corbett Park till evening. On the one hand, the nation was mourning the death of the soldiers, on the other, PM modi was busy savouring tea and snacks in Circuit House. For four hours after our soldiers were martyred in Pulwama, the PM was busy in self-promotion and savouring tea and snacks. Is there any PM in the world like this? I have no words really.," he added. "Even more painful is the fact that despite the deadly terror attack, PM Modi did not declare a national mourning to ensure that his political rallies and inauguration functions organised at the cost of the government exchequer, are not cancelled. "What is more, the PM reached one hour late in the function to pay tributes to martyrs at Palam Airport on February 16. The behavior of the BJP leaders has been even more shameful. BJP leader Sakshi Maharaj was seen smiling while standing with the mortal remains of the martyrs. "Further, Tourism Minister KJ Aphons was seen taking his own selfie with the mortal remains of a martyr in Kerala. All this shows the misplaced priorities of the Modi Government at this sensitive situation. Through their behavior , the PM and the BJP leaders have insulted the memory of the martyrs,’’Mr Surjewala said. He said that the reality was that the Modi Government was neither giving any political response on the Pulwama attacks nor fulfilling their responsibility. Taking a dig at Prime Minister's 'hugplomacy' where PM Modi broke the protocol to receive the Saudi Crown Prince at airport, Surjewala said that the "the PM gave a grand welcome to a country which gave clean chit to Pakistan in the Pulwama attacks…Is this the way of paying homage to martyrs of Pulwama." Mr Surjewala also charged BJP president Amit Shah of politicising the attacks. "By inciting the people against the Congress, BJP president Amit Shah is indulging in cheap politics. On February 17, in a rally in Assam, the BJP president, while politicising the attacks, said, “their sacrifices will not go in vain, because there is a BJP Government at the Centre and not one of the Congress,”Mr Surjewala said.