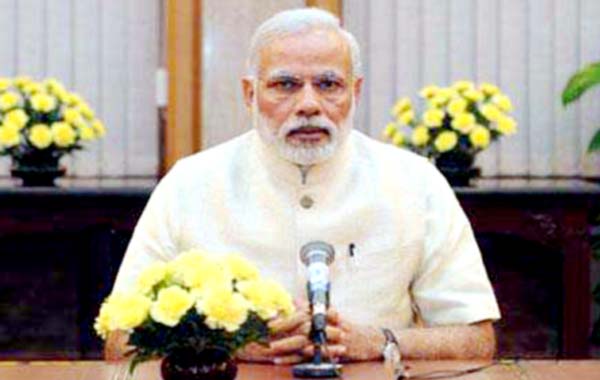 Agencies, New Delhi, Prime Minister Narendra Modi on Sunday reached out to the states by crediting them for the success of Goods and Services Tax (GST) and said that the historic tax reform is a great example of ‘cooperative federalism’. “If I have to give credit to anyone for successful implementation of ‘One Nation One Tax reform’, then I credit the states of our nation. GST is a great example of Cooperative federalism, where all the states decided to take a unanimous decision in the interest of the nation,” Mr Modi said speaking in the 45th edition of his monthly radio broadcast ‘Mann Ki Baat’ over All India Radio. ‘Till date, 27 meetings of GST council were held where people from different ideologies sat together, but all decisions were taken with consensus,” he said as the state is set for completion of first year since the new and uniform tax regime has come into effect. The GST, initiated by the UPA regime originally is an uniform taxation mechanism that has replaced multiple Indirect Taxes in India. The Goods and Service Tax Bill was passed in Parliament March 29, 2017 and new tax regime came into effect from July 1, 2017. It is hailed as a comprehensive, multi-stage and destination-based tax. “The check post has become extinct after the arrival of the GST scheme and the movement of goods has become faster, which not only saves time but is also accruing benefits in the area of logistics,” he said. Prime Minister said earlier with regard affairs related to taxation, people spoke about “rampant complaints of Inspector Raj” but now the GST is seen not only as the victory of integrity “but it is also a celebration of honesty”. “GST is probably be the biggest tax reform in the world. The successful implementation of such a huge tax reform in India was successful only because the people of the country adopted it and through the power of the masses,” he said. Earlier, there were 17 different taxes, but there is only one tax today, he stressed.‘Return to refund, everything is online and transparent.’ World’s greatest tax reform, which would have normally taken 5-7 years, became stable in India in just one year, he said. Mr Modi had a word of praise for corporate professionals and IT engineers in Bengaluru who came together to establish ‘Sahaj Samriddhi Trust’. They have activated this trust to double up farmers’ income, he said. The Prime Minister also remembered Dr Shyama Prasad Mukherjee for his role in the education sector and industrial development of India. ‘Mukherjee laid strong foundation of India’s industrial development and he dreamt of making India self-reliant in every sector related to industry,’ Mr Modi said. Hailing Sant Kabir, Mr Modi said the thoughts and ideals of Sant Kabir Das Ji emphasised on social harmony. Remembering the martyrs of the Jallianwala Bagh massacre, he said ,’ April 13 next year will mark 100 years of the unfortunate Jallianwala Bagh massacre; it was the day when all limits of cruelty were crossed and power was misused.’ Inviting ideas for the 550th Prakash Parv of Guru Nanak Dev Ji next year, he said ‘In 2019, we mark the 550th Prakash Parv of Guru Nanak Dev Ji. Let us think about ways in which we can mark this historic occasion.’ Mr Modi extended good wishes to the medicos for July 1 Doctor’s Day and said the medicos not only cure but they also heal people and even provide lifestyle guidance. “We remember doctors only at the time of crisis. But doctors are akin to mothers and often gives us new life. Mothers give us birth, but medicos often give us new life,” the Prime Minister said . He also referred to the grand celebration of yoga across the globe on June 21 and maintained that.Yoga has truly emerged as a unifying factor and has been able to break all barriers. Mr Modi made special mention about yoga enthusiasts, including women, taking part in this year’s InternationalDay for Yoga in Saudi Arabia. The Mann Ki Baat programme is broadcast at all the All India Radio’s networks, FM channels, local radio stations and community radio.