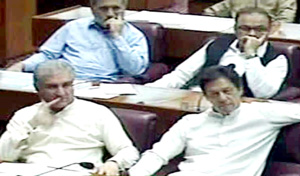 Islamabad, Pakistan Prime Minister Shahid Khaqan Abbasi and Pakistan Tehreek-e-Insaf chairman Imran Khan arrived at Parliament House on Thursday to attend a National Assembly session on the merger of the Federally Administered Tribal Areas (FATA) with Khyber Pakhtunkhwa (KP). An amendment bill clearing the way for the merger of FATA with KP is set to be presented in the National Assembly today, a day after the parliamentary committee gave it a go-ahead, according to a Geo TV report. Prime Minister Shah Khaqan Abbasi while addressing the NA said, "The FATA-KP merger bill is everyone's bill not government's nor opposition's." A session of the parliamentary leaders chaired by PM Abbasi was held on Wednesday, where the leaders finally agreed upon the amendment bill for the merger. The session was attended by Barrister Zafarullah, Senate Opposition leader Sherry Rehman, Pakistan Tehreek-e-Insaf leader Shah Mehmood Qureshi, and Aftab Sherpao.Jamiat Ulema-e-Islam-Fazl and Pakhtunkhwa Milli Awami Party members boycotted the session. Earlier this week, the amendment was approved by the federal cabinet in a session presided over by the prime minister. The seats for the KP assembly will increase to 147 from the current 126 after the province’s merger with FATA, according to the proposed 30th Amendment of the Constitution. The general seats of the provincial assembly will increase from 99 to 117. The seats for women will increase from 22 to 26, and religious minorities’ seats from three to four. The KP assembly adopted a resolution on December 14, 2016 in favour of merging FATA with KP with the aim of rehabilitating and reconstructing the infrastructure including roads, communications, power lines, water supply, education and health facilities. In a meeting on December 26, 2017, the federal cabinet approved the formation of a high-level national implementation committee for FATA reforms.