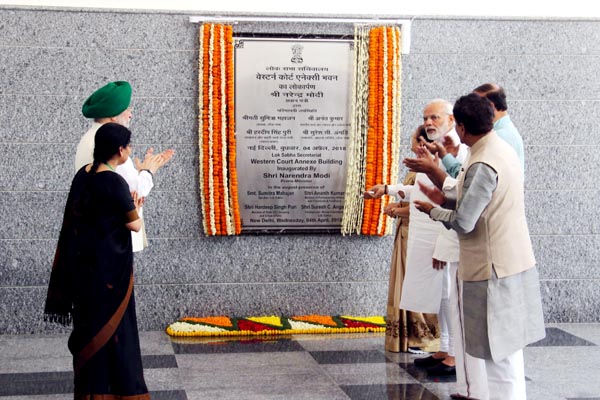 New Delhi, Prime Minister Narendra Modi inaugurated on Wednesday the newly constructed Western Court Annexe here which will serve as transit accommodation for Members of Parliament. Speaking on the occasion, the Prime Minister appreciated Lok Sabha Speaker Sumitra Mahajan for her efforts in the completion of this project. Ms Mahajan always has the well-being of the MPs in mind, he said, adding that her compassion was reflected in the attention to detail that has been given in this project. Congratulating all those involved in the construction of the project, Mr Modi said the work has been completed well within the stipulated time and cost. The Prime Minister said when MPs are newly elected, they have to stay in hotels and this makes headlines. However, he said 'what is often missed is that previous occupants overstay beyond the designated time'. The Prime Minister asserted that the Centre was walking on the path shown by Dr Babasaheb Ambedkar. 'At the core of Dr Ambedkar's ideals is harmony and togetherness,' he said, adding that working for the poorest of the poor was the Government’s mission. The Prime Minister announced that the memorial to commemorate Babasaheb Ambedkar, at 26 Alipur Road in New Delhi, which was the last home of Dr Ambedkar, will be inaugurated on the April 13, the eve of his birth anniversary. He condemned the politics being played by certain people, in the name of Dr Ambedkar.