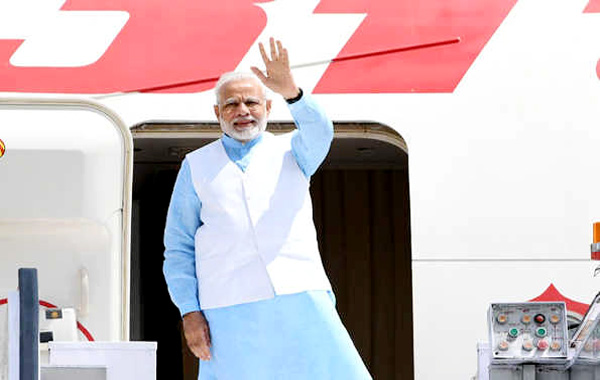 New Delhi, Prime Minister Narendra Modi on Monday embarked on a five-day visit to three African nations - Rwanda,Uganda and South Africa. "Embarking on a momentous journey to strengthen our historical bond with Africa! PM Narendra Modi departs on a 3-nation tour to Rwanda, Uganda & South Africa from 23-27 July," MEA spokesman Raveesh Kumar tweeted. This is Prime Minister Modi’s maiden visit to Rwanda and Uganda. "In South Africa, he will attend the 10th BRICS Summit," he said. The visit of the Prime Minister to these three countries is a reflection of the intensity of India's engagement with Africa and the priority New Delhi attaches to its relations with African countries, officials said. During his two day visit to Republic of Rwanda, among other engagements, Mr Modi will also participate in a local event on "Girinka -one cow per family" and gift 200 cows as a contribution from India. Girinka is a social protection scheme of the Rwandan Government personally overseen by President Paul Kagame. The bilateral relations between India and Rwanda reached a new height in January 2017 with the first ever official visit of Head of State of Rwanda Paul Kagame at the invitation of Prime Minister Modi. President Kagame visited Delhi in Jan 2017 to participate in the Vibrant Gujarat Global Summit and later in March 2018 to participate in the Founding Conference of International Solar Alliance (ISA). Rwanda has also signed and ratified the Framework Agreement of International Solar Alliance. Prime Minister will also visit Republic of Uganda on July 24 and Republic of South Africa from July 25 to 27.The visit to South Africa is in the context of BRICS Summit. Prime Minister’s official engagement in Rwanda and Uganda include bilateral meetings with the Presidents, delegation level talks and meetings with the business and the Indian communities. In South Africa, apart from participating in the BRICS Summit, Prime Minister Modi will have a bilateral meeting with President Cyril Ramaphosa. This will be the first visit by the Prime Minister to South Africa after new administration led by President Ramaphosa assumed office in February 2018. A meeting between Prime Minister Modi and Chinese President Xi Jinping is likely but an official said, "At this point we don’t have a fix on bilaterals with what country".