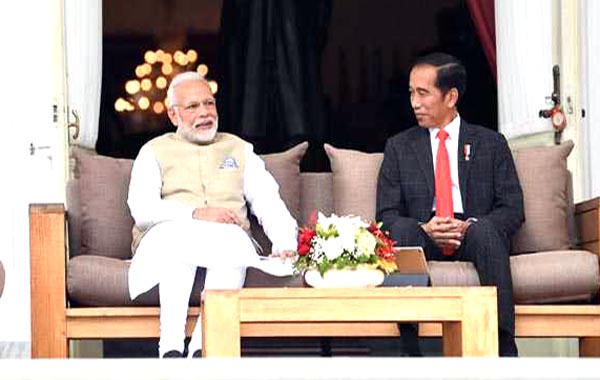 Jakarta, Prime Minister Narendra Modi on Wednesday condemned the recent terror attacks in Indonesia and said at this juncture of sadness and challenges, India stands shoulder to shoulder with Indonesia. At a joint press conference with Indonesian President Joko Widodo here, Mr Modi said such terror strikes only make it clear once again that: "in order to fight terror - there is need to work together globally". Earlier this month, three separate locations in the city of Surabaya were hit by the bombings.Blasts, including a suicide bombing, also struck outside churches in Indonesia killing at least six and wounding dozens of others. Underlining the importance of greater ties between two countries, the Prime Minister said special focus should be laid on maritime security as this would be also vital to serve the economic and commercial interests of both India and Indonesia. Describing President Widodo as a "bharat ke bahut hi acchey dost (a very good friend of India)", Mr Modi said the geo-strategic location of both India and Indonesia is also crucial in the context of safety and security in the Indo-Pacific region. He also lauded the warm welcome given to him by Indonesian government and citizens and said he is particularly delighted to appreciate President Widodo's "personal commitment" to give a boost to India-Indonesia ties. "The warm welcome has touched my heart," he said. Before the delegation level talks, both PM Modi and President Widodo held one-on-one parleys. In a tweet, MEA spokesman Raveesh Kumar wrote: "Productive exchange of views on bringing our two countries further closer! Tete-a-tete between PM @narendramodi and Indonesian President @jokowi at Merdeka Palace in Jakarta". Mr Modi also said with regard to countries like Indonesia, India is keen to add another element to its Act East Policy. "It will be SAGAR - that would mean Security and Growth for All in the Region," Mr Modi said, adding this idea is also in tune with the "visionary leadership" of the Indonesian President. Earlier, President Widodo accorded a warm welcome to Prime Minister Modi to the Merdeka Palace.The meeting between two leaders on Wednesday has been the fourth moot but this is Prime Minister Modi's first visit to Indonesia.