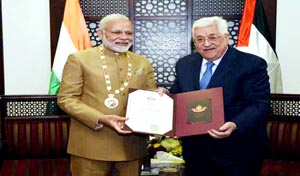 Ramallah, On the first ever visit by an Indian Prime Minister to Palestine, Prime Minister Narendra Modi was on Saturday conferred with the Grand Collar of the State of Palestine, a rare honour for a foreign dignitary. Commendation of Grand Collar read, "in recognition of his wise leadership, lofty national & international stature, in appreciation of his efforts to promote historic relations between Palestine and India; in acknowledgement of his support to our peoples’ right to freedom so peace prevails in region.’’ Palestine President Mahmoud Abbas met Mr. Modi and conferred the honour upon him after conclusion of bilateral talks. The honour was bestowed upon Mr. Modi in recognition of his contribution to relations between India and Palestine. The Grand Collar is Highest order given to a foreign dignitary. Earlier, Mr. Modi reached Ramallah in a chopper from Amman which was escorted by Royal Jordanian choppers and Israeli choppers.He was accorded ceremonial guard of honour at Al-Muqata'a, compound of the presidential headquarters in Palestine's Ramallah. The Prime Minister laid a wreath at the mausoleum of Yasser Arafat in Ramallah, the de facto administrative capital of Palestine, situated in the central West Bank. Mr Modi had visited Israel last year followed by his counterpart Benjamin Netanyahu’s trip to India last month.