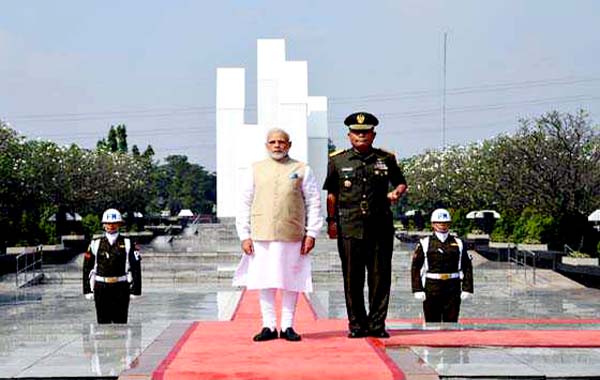 Jakarta, On his maiden visit to Indonesia, Prime Minister Narendra Modi on Wednesday paid homage at the famous Kalibata Heroes Cemetery here. "Paid tributes at the iconic Kalibata Heroes Cemetery in Jakarta," the Prime Minister tweeted. In his missive in the micro blogging site, MEA spokesman Raveesh Kumar wrote: "Lest we forget...Paying homage to martyrs of Indonesian independence struggle! PM @narendramodi laying wreath at the Kalibata National Heroes’ Cemetery and signing the Visitor's Book". Built in 1953, it is a military cemetery in Indonesia. More than 7,000 people who are military casualties and veterans from Indonesian War of Independence are buried there. This also includes many Japanese veterans of the Imperial Japanese Army who stayed in the Dutch colony after World War II of their own free will and fought for the Indonesian independence. Among other agendas during his stay in Indonesian capital, Mr Modi will have talks with President Joko Widodo and both sides will also have delegation level talks.