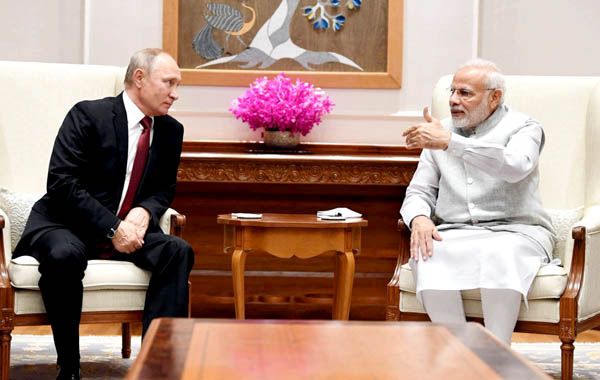 New Delhi, Prime Minister Narendra Modi and the visiting Russian President Vladimir Putin began the crucial bilateral talks here on Friday.Both the leaders met at the Capital's Hyderabad House. Before sitting for the parleys - where important issues like defence tie up is expected to figure prominently - both the leaders shook hands and posed for photographs. At one point both the leaders also embraced each other and took themselves into arms.The leaders are taking part in the delegation-level talks. "Welcome to India, President Putin. Looking forward to our deliberations, which will further enhance India-Russia friendship," Mr Modi tweeted on Thursday evening after the two leaders held an informal meeting at Prime Minister's official residence here. The two sides are expected to review bilateral ties, including defence cooperation during the 19th India-Russia Bilateral Summit.Mr Modi and President Putin may also deliberate on a range of regional and global issues.The two countries are expected to sign a number of agreements. All eyes are on the possible signing of a 5 billion dollar deal to procure most advanced air defence system, the S-400 Triumf.There will be exchange of Agreements and Press Statements, official sources said. Mr Putin will also meet President Ram Nath Kovind at the Rashtrapati Bhawan. The visiting dignitary will also interact with a group of talented children and will address India-Russia Business Summit. In the recent past, India has given much emphasis on its ties with Russia.Mr Modi flew to Sochi for an informal summit with Putin in May this year.The two countries have improved ties lately under bilateral arrangements as also in fora such as BRICS.