PM to gift projects worth Rs 1,200 cr to Varanasi on Sunday 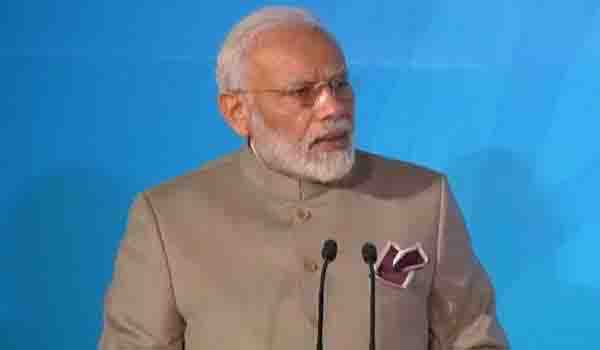 Varanasi, Prime Minister Narendra Modi will inaugurate development projects worth Rs 1,200 crore in his parliamentary constituency on Sunday. UP Chief Minister Yogi Adityanath, several Union and state ministers would be present along with the Prime Ministers who is on a daylong visit to the temple city. Amid tight security arrangements, Mr Modi will inaugurate and lay foundation for around 48 projects, including a 430-bed super-specialty government hospital at the Banaras Hindu University(BHU) and will dedicate to the nation the Pandit Deendayal Upadhyaya Memorial Centre and unveil a 63-feet tall statue of the BJP ideologue in the adjoining Chandauli district.

It would be the tallest statue of sociologist Pandit Deendayal Upadhyaya in the country. Over 200 artisans, including 30 craftsmen and artists from Odisha, worked day and night for the last one year to complete the structure. The memorial centre will have the engravings of the life and times of the historian. On the day, the Prime Minister would also flag off the third private train 'Maha Kaal Express' operated by IRCTC through video conferencing. The first overnight private train in the country will connect three Jyotirlinga pilgrim centres of Varanasi in Uttar Pradesh, and Ujjain and Omkareshwar in Madhya Pradesh.

The other projects to be unveiled by the Prime Minister include a 74-bed psychiatry hospital at BHU. He will also inaugurate a two-day event 'Kashi Ek, Roop Anek' at Pandit Deendayal Upadhyaya Hastakala Sankul, showcasing products from all over Uttar Pradesh. He would also interact with buyers and artisans coming from countries, including the United States, England and Australia.