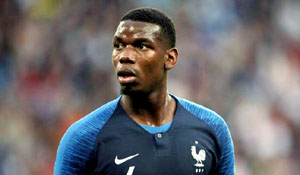 ST PETERSBURG, France midfielder Paul Pogba dedicated his side's World Cup 1-0 semi-final win over Belgium to the 12 Thai boys who were rescued from a flooded cave along with their coach on Tuesday. "This victory goes to the heroes of the day, well done boys, you are so strong," Pogba wrote on his official Twitter account after Samuel Umtiti's headed goal put France in Sunday's World Cup final in Moscow, where they will play Croatia or England. The "Wild Boars" soccer team, aged between 11 and 16, and their 25-year-old coach became trapped on June 23 while exploring the cave complex in the northern province of Chiang Rai when a rainy season downpour flooded the tunnels. On Wednesday, La Liga said they had invited the boys and their coach to Spain to attend a Spanish top flight game in the future when they have fully recovered from the ordeal. La Liga's president Javier Tebas said: "When the moment is right and everyone is ready I would like to invite the children and their coach to go to a Liga game. "We would like to host them and share with them the happiness of football, hoping that this can go some way to helping them after everything they've been through in the last few weeks." FIFA had invited the boys to Sunday's World Cup final although the world organising body said that due to medical reasons the boys would not be in a position to travel to the game, although they would invite them to an event in the future.