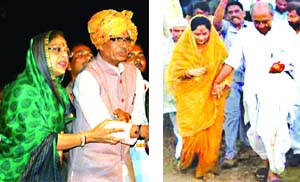 Chronicle Reporter, Bhopal The Madhya Pradesh’s lifeline Narmada is likely to in the focus during the state assembly elections to be held towards the year-end. The Narmada yatra of two top leaders has changed political equations in the state. Chief Minister Shivraj Singh Chouhan showed his love and concern for river Narmada during his much-publicized Narmada Yatra. He was even feted by environmentalists in Delhi for working for the protection of the river. After completing his six-month long Narmada Parikrama, former chief minister Digvijaya Singh has reached Delhi. He is likely to meet party president Rahul Gandhi and other senior leaders soon. These meetings are likely to have effect on state politics. Speculations are rife about Digvijaya’s likely comeback to state politics after completion of his spiritual journey. His return to state politics could alter internal dynamics within the Congress ahead of the Assembly polls. Before leaving for Delhi, Digvijaya Singh performed the abhishek of Jyotirlinga at Omkareshwar with his wife Amrita Singh. He was accompanied by former MP Rameshwar Neekhara and party state president Arun Yadav. He performed the abhishek in special ‘muhurat’ at exactly 10.53 am. Digvijaya is serving a self-imposed exile since losing power in Madhya Pradesh to Uma Bharti in 2003. Prior to 2003 Assembly polls, Singh brimming with confidence, had announced his decision to shun active politics for 10 years if he lost but extended his exile after 2013. Political analysts have always maintained that Digvijaya’s Narmada tour was a precursor to his return to active politics in Madhya Pradesh. Earlier Kamal Nath flew to Narsinghpur to be part of the programme held on Monday to mark the culmination of Digvijaya’s Narmada Yatra. Nath said, “The completion of the religious trek is unprecedented. I salute Singh, who is our collective pride. Let us learn from the sacrifices and commitment made during the yatra. If we’re able to replicate even five per cent of sacrifices and pains undertaken by Singh and his wife over the next six months, the results will be for all to see.” Even BJP leaders, including former Union minister Prahlad Patel and his brother Jalam Singh Patel, a state minister, were present at the Bramhand Ghat. When queried by the scribes about whether he would be Congress’s CM face, Singh said, “The decision on the CM face will be taken by the party’s national president Rahul Gandhi and UPA chairperson Sonia Gandhi. No individual leader can take a call or demand it”. Singh was successful in roping in senior party leaders such as AICC general secretary and former Rajasthan chief minister Ashok Gehlot, veteran leaders Kamal Nath, and Jyotiraditya Scindia to join his “spiritual journey” indicating his “undiminished” clout in the party. His signal to re-enter state politics has given rise to apprehension in a section of Congress of revival of factional feud in the state party in coming days. There are primarily three factional leaders in party in MP. They are Digvijaya Singh, and Congress MPs, Kamal Nath and Jyotiraditya Scindia. Although, the respective followers of the three leaders want them to be declared as chief ministerial candidate ahead of the year-end Assembly elections, Singh has, however, already announced that he would play the role of mentor to help the party return to power in the state.