Poor will be given “support” and made capable: CM Chouhan 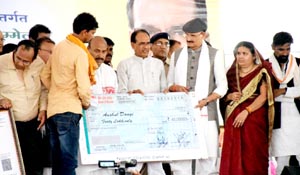 Chronicle Reporter, Bhopal, Chief Minister Shivraj Singh Chouhan has said that the development of villages, poor and farmers has always been the top priority of the government. Every poor person will be strengthened through ‘Sambal’ under the Mukhya Mantri Jan Jalyan Yojana. The government will keep no stone unturned in the development of the poor and the hard working people. The Chief Minister was addressing a joint conference of unorganized workers and tendu patta collectors at Antoura village near Badagaon (Dhasan) in Tikamgarh district today. The Chief Minister announced to install second statue of martyr Narayan Das Khare and Amril Lal Fanindra and organise a big Shahid Mela every year in Badagaon in their memory on MLA’s demand. He announced to open collegesin Badagaonm Baldevgarhm Khargapur of Tikamgarh district and said all demands for development works will be examined and completed soon. He announced to fet approval of Rs 272 crore fund for Bansujara group water-supply scheme. Chouhan symbolically distributed registration letters and residential pattas to unorganized workers. He distributed shoes, slippers, sarees and water bottles to 33 thousand 777 tendu patta and Mahua flower collectors in the district under the charan paduka scheme, The Chief Minister also made tendu patta collector Smt. Mankunwar Bai and Dhaniram wear shoes/slippers and presented sarees and water bottles to them. He presented a cheque of Rs 40 lakh for poha manufacturing unit to Anshul Dangi under the Yuva Udyami Yojana. he distributed benefits as per eligibility to other beneficiaries. Chouhan dedicated and performed bhoomi-pujan of 13 development works at a cost of Rs 122 crore 55 lakhs 20 thousand. The Chief Minister said that the government will give registration certificates in the form of smart cards to establish their identity to every labourer. The smart card will have his complete information. The smart card holder will be eligible to avail benefits of the Mukhya Mantri Jan Kalyan (Sambal) Yojana. Under the scheme, the labourer will be given the benefit of 11 types of facilities/assistance/bank linkage. Government will pay the fees of children from Class I to Ph.D. He said that the poor women will be given bank linkage to set up enterprise. Government will make new recruitments to give employment to youth. Chief Minister has said that we will provide pucca house to 40 lakh poor within the next 4 years. Pucca houses will be constructed for each poor by giving him/her a patta and free medical treatment will also be provided. Ten lakh pucca houses will be given every year under the Mukhyamantri Antodaya Awas Yojana. The amount will be deposited in the bank account of the beneficiary, in whose name the house will be constructed. Informing about the Mukhyamantri Jan-Kalyan (Sambal) Yojana to unorganized labourers and tendu leaf collectors, Chouhan said that hardworking labourers of all the categories, farmers holding less than 2.5 acre land, all the small businessmen besides persons, who are not the income tax payee and those who are not in government service, all will come under the ambit of this scheme. Chouhan further stated that the registration camps will be organized in the month of July and August to provide electricity at the flat rate of Rs. 200. Work to deposit fee of the poor children will start from July. Benefits will be provided to the unorganized labourers, who are registered under the Jan-Kalyan Yojana by organizing programmes in each block of the state on June 13. He informed that the government has taken a decision that fee for the poor children,who get admissions in I.I.T., I.I.M., NEET, Engineering, Medical College, Law College, Polytechnic College will be borne by the government. The Chief Minister expressed that a 5 members’ committee will be formed in each village and ward to monitor the distribution of Mukhyamantri Jan-Kalyan (Sambal) Yojana’s benefit. This committee will be formed comprising 3 unorganised labourers and 2 advisers at the approval of Minister District In-Charge. Union Minister of State for Women and Child Development and Minority Affairs Dr. Virendra Kumar urged the Chief Minister for approval to complete development/construction works of various categories in Tikamgarh Parliamentary constituency besides sending proposals from the state government to the union government in few cases. The programme was also addressed by the Member of Legislative Assembly K.K. Shrivastava.Minister for Public Health and Minister District In-Charge Rustam Singh, President of Jila Panchayat Parvatlal Ahirwar, MLAs Dinesh Kumar Ahirwar, Anil Jain and Smt. Rekha Yadav, Smt. Anita Sunil Nayak, other Public Representatives, officers, labourers and tendu leaf collectors besides villagers in large number were present in the convention.