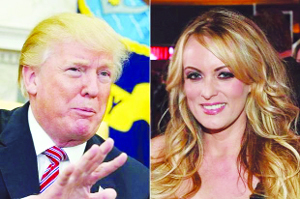 Agencies, Washington An adult-film actress who claims she had sex with Donald Trump before he was president said on Sunday she had been threatened in 2011 while in a parking lot with her infant daughter to discourage her from discussing the relationship. Stormy Daniels, whose real name is Stephanie Clifford, told CBS News’ “60 Minutes” that she was on her way to a fitness class with her child when an unknown man approached her, according to a transcript of the interview released on Sunday. “And a guy walked up on me and said to me, ‘Leave Trump alone. Forget the story.’ And then he leaned around and looked at my daughter and said, ‘That’s a beautiful little girl. It’d be a shame if something happened to her mom.’ And then he was gone,” Daniels said. Daniels sued the president on March 6, stating Trump never signed an agreement for her to keep quiet about an “intimate” relationship between them. White House aides did not respond immediately to requests for comment after the interview aired. Trump did not respond to reporters’ shouted questions about whether he would watch the interview when he returned to the White House from Florida on Sunday evening. Daniels’ appearance represented back-to-back trouble for Trump after an interview broadcast last week on CNN with former Playboy model Karen McDougal, who described a 10-month-long affair with Trump starting in 2006.