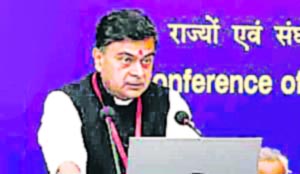 Agencies, New Delhi,Calling the DISCOMs as the axis of power sector, Power Minister R K Singh on Tuesday called upon the states to plug DISCOMs losses. Addressing the Conference of Power and New & Renewable Energy Ministers of States & Union Territories at Shimla, Mr Singh assured the states to provide more funds if needed for infrastructure creation. The conference which saw participation of Power Ministers and Secretaries form the States/UTs and senior officials from power and renewable energy (RE) sectors deliberated upon various issues pertaining to the power and RE sectors in India. Various Government programs were taken up for discussion such as - Power for All, Saubhagya, IPDS, and UDAY and RE sector during the one day conference. He said that subsidies in power sector should be routed through Direct Benefit Transfer (DBT). Calling the prepaid meters a pro poor step, Mr Singh said that today a poor person may find it difficult to pay one month’s electricity bill at one go. Smart prepaid meters will enable him to pay in small installments as per his convenience without the fear of his connection being cut. It will also eliminate the problem of wrong bills being raised. Talking of reforms in power sector, the Power Minister said that affordability is the key and a mechanism need to be put in place so that power from most efficient plants is utilized first. This would bring down electricity prices. On the issue of coal shortage, Mr Singh said that supply of coal has increased but coal problem is persisting because our demand is increasing which is a good sign for the development of our country. Listing various steps taken to address coal shortage, he said that states have been given freedom to import coal if they needed so. At the same time efforts are being made to start new mines and increase transportation capacity. On renewable energy front, Minster said that it has tremendous potential but balancing need to be done by power generated from hydro and gas. He also cautioned that hydro and gas should serve as peaking load not based load. He also mentioned that the Government was bringing Hydropower Policy to address various issues facing hydro power sector. The Minister said that he would make every effort and work in collaboration with States to ensure that every citizen of India has round the clock power supply.