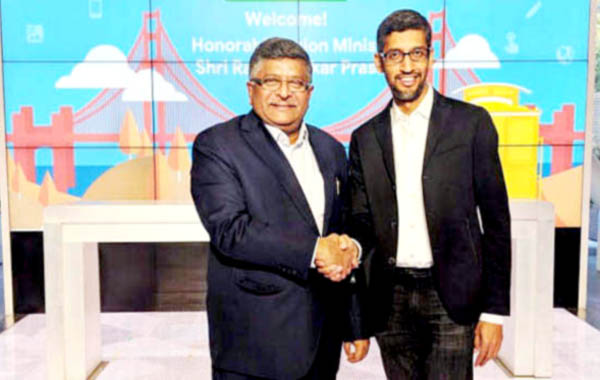 New Delhi, India is an improved and profitable destination for investments and offers a range of exiting opportunities to US firms, particularly those from the technology and electronics sector due to new government policies and its fast growing market, Union Electronics and IT Minister Ravi Shankar Prasad has said. He said India and United States are partners in the digital arena and share a relationship that is mutually beneficial and enriching as exemplified by the large number of Indian companies working in the US. Mr Prasad was on a three-day visit to San Francisco and the Bay Area where he held meetings with a large number of CEOs and tech leaders from leading IT and Electronics firms based in the region. The tour concluded on August 29. The Minister also met Google CEO Sundar Pichai and discussed the role technology can play in empowering Indian users and addressing challenges unique to India. Mr Pichai said it was a privilege to be a part of India’s exciting digital transformation. Mr Prasad also invited US firms to make investment in India and develop deeper partnerships to take advantage of the unique growth opportunities in the country, an official statement said here on Thursday. He emphasised that the government was cognisant of the need to strike a balance between data availability, data anonymity, data innovation, data security and data privacy. The enthusiasm for participating in India's inclusive digital growth story is apparent and reflects the strategic ties between two great democracies. "Reforms and growth oriented policies of the Narendra Modi government has created an environment conducive to business growth in India and made doing business in India attractive and easier than ever before," he added. The Minister said the Centre run by an Indian company in the US, was an example of how Indian companies were bringing technical expertise and investments into the US, which was one of the top 5 investment destinations for FDI from India. Quoting a survey by CII in November 2017, the Minister said that around 100 Indian companies had invested 17.9 billion dollars in the United States. According to the report, they have also spent over 588 million dollars in Research and Development and dedicated over US 147 million dollars to Corporate Social Responsibility Programmes, he added. Mr Prasad also attended a seminar on “Promoting Digital India and Economic Growth” where some of the largest US firms including Amazon, Apple, Master Card, Qualcomm, Globall, Walt Disney, Salesforce, IVP and PayPal also participated.