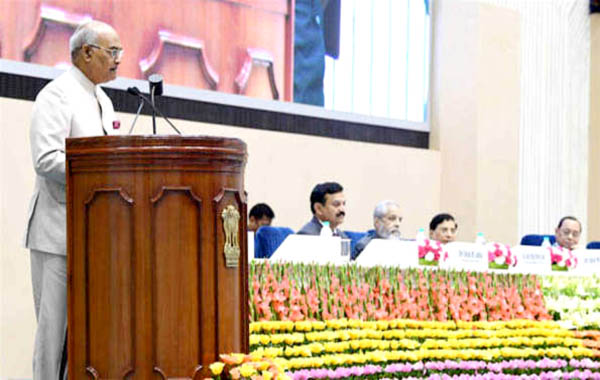 New Delhi, Noting that the Indian judicial system was marked by long delays, President Ram Nath Kovind on Saturday expressed the hope that the entire legal fraternity will resolve not to seek adjournments except in absolutely unavoidable circumstances. Inaugurating the National Conference organised by the Supreme Court Advocates on Record Association here, Mr Kovind said while the judiciary was making sincere efforts to curb the practice of frequent adjournments, the judges were over-burdened by sheer volume of cases. 'There is a backlog of 3.3 crore cases in various courts of the country. Of these, 2.84 crore cases are in the subordinate courts. Another 43 lakh are in the High Courts and about 58,000 in the Supreme Court,' he observed. 'There are many reasons for such delays. There are infrastructure gaps and considerable vacancies, particularly in subordinate courts,' he said. Noting that India’s judiciary was respected across the world as an upholder of justice for the defenceless, he said that a new thinking gradually emerging on frequent adjournments. Mr Kovind said that demands from our advocates and legal professionals had changed dramatically in recent decades. 'As the Indian economy has opened up, business and trade law and technology law have come to acquire a new salience and specialisation. The study of these has added lustre to our legal education,' he said. Pointing out that the traditional law faculties in public universities provided the backbone of the legal fraternity in India, he suggested that their rejuvenation, including access to greater funding from private and innovative sources, should be a common endeavour. 'When it comes to private law schools of a certain stature, the Bar Council of India could consider providing greater autonomy – perhaps recognising them in the manner of `institutes of eminence’,' he said.