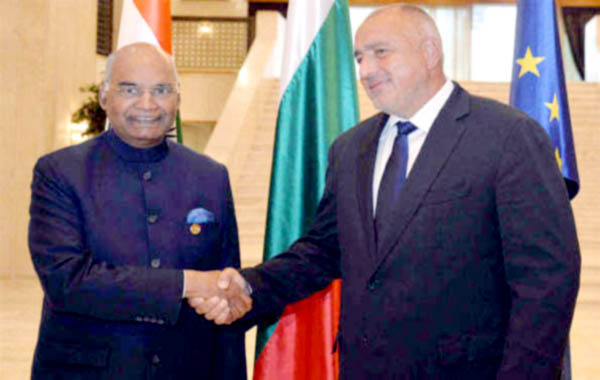 Sofia, President Ram Nath Kovind on Thursday called for stronger bilateral business relations between India and Bulgaria.In his meeting with Prime Minister of Bulgaria, Boyko Borissov here, Mr Kovind said that India was keen to substantially upgrade its economic relations with Bulgaria. Separately he had pointed out on another occasion that the bilateral trade between the two countries was just over USD 300 million, which was ``way below potential’’. ``Bulgaria is doing well in the fields of IT, pharma, technology, food processing, among other sectors. These are areas where there is strong interest among Indian companies to forge joint ventures and invest in that country,’’ he said in his meeting with the Prime Minister. The President pointed out that the defence collaboration between the two countries had been going on for long. He said India was keen to leverage Bulgarian know-how and technology and extended an invitation to Bulgarian companies to come and manufacture in India as part of Make in India programme. During the discussions, the President said that under Mr Borissove’s Bulgaria had made appreciable progress as a nation.He also complimented him for successfully conducting the rotating Presidency of the European Union from January to June 2018. Later, the President, jointly with Bulgarian President Rumen Radev, unveiled a statue of Mahatma Gandhi at South Park, Sofia. In his remarks on the occasion, the President said that he was grateful to the people of Bulgaria for giving Mahatma Gandhi an eternal home in Bulgaria on their special day – the National Unification Day. ``This is a meaningful tribute to a man who dedicated his entire life to the service of humanity. In these times of strife, reckless violence and wanton destruction, his thoughts and values are ever more relevant,’’ he said. Addressing the Bulgaria-India Business Forum in Sofia on Wednesday, Mr Kovind said Bulgarian companies could take advantage of the high growth trajectory of the Indian economy. And Indian companies could form partnerships in Bulgaria both for the domestic market and for the wider EU economy. At a banquet hosted in his honour on Wednesday by Mr Radev, Mr Kovind said the future of mutual relationship was with the youth who must engage with one another. ``Bulgarian star, Dimitar Berbatov has already inspired many football fans in India. And now, with the magic of cinema and the beauty of Bulgarian mountains at work, we are connecting still more,’’ he added. He has now left for the Czech Republic on the last leg of his visit to three European nations – Cyprus, Bulgaria and the Czech Republic.