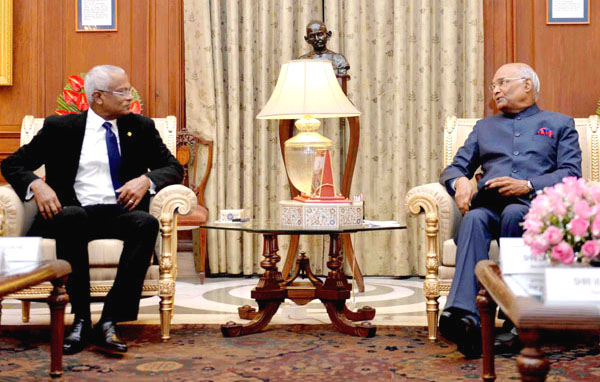 Agencies, New Delhi President Ram Nath Kovind has invited visiting Maldives President Ibrahim Mohamed Solih to become a member of the International Solar Alliance in which India has taken the lead to fight climate change. Welcoming his Maldivian counterpart to India, Mr Kovind said India was deeply concerned about the impact of climate change especially on the Maldives and other small Island states that are most vulnerable to it. He said India was 'honoured' that Mr Solih had chosen to visit India on his first State Visit and that too, within a month of assuming office. 'This speaks for our close ties and special friendship,' he said. At a banquet he hosted on Monday night, he said that India attached the highest importance to its relationship with the Maldives. 'Maldives can always count on India as a steadfast partner in its progress as a nation,' he said. 'As the Maldives Government embarks on its journey to fulfill the mandate given by its people, India wishes to see a democratic, stable, prosperous and peaceful Maldives,' he said. He assured the visiting President of all possible support as a 'true friend'.