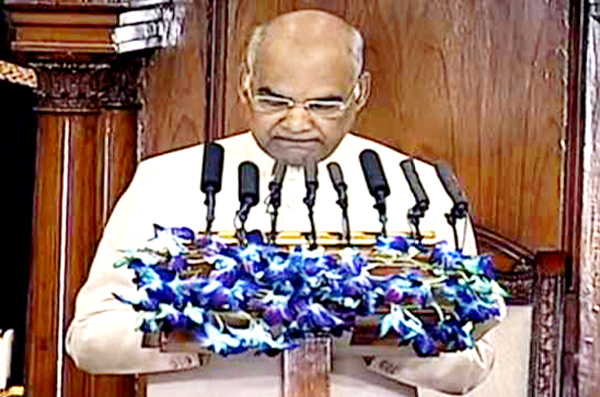 New Delhi, Raising the election pitch, President Ram Nath Kovind on Monday gave a call to build a political consensus on simultaneous elections to State Assemblies and the Lok Sabha. In his 45-minute address, the President unfurled the government’s vision of a New India giving detailed account of the government’s schemes and initiatives including introduction of the Bill on Triple Talaq and Amendment Bill to accord Constitutional Status to the National Commission for Backward Classes. He said the policies of the NDA government were guided by the principle that political democracy could not survive without ``social and economic democracy’’. His observations, made in his joint address to both Houses of Parliament before the commencement of the Budget session, were met with thunderous applause from ruling party benches. Mr. Kovind emphasized that the government was committed to ``empowerment and not appeasement’’ of minorities. To the thumping of desks, he said India had secured representation in the International Tribunal for the Law of the Sea, International Maritime Organization and Economic and Social Council and in a keenly contested election to the International Court of Justice, India emerged victorious.Besides, the country had tremendously improved its World Bank ranking in Ease of Doing Business.