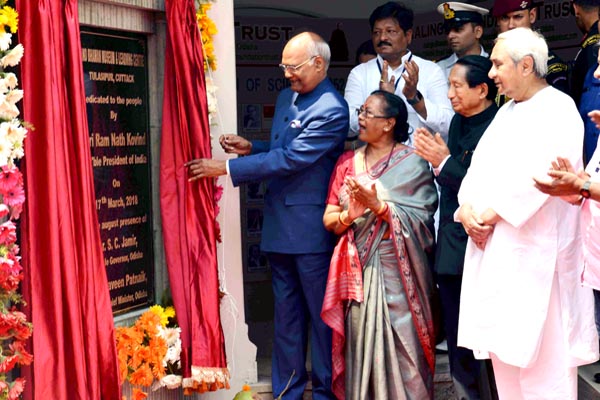 Cuttack, President Ram Nath Kovind today dedicated Anand Bhawan Museum and Learning Centre, the ancestral house of legendary leader and former Chief Minister of Odisha Biju Patnaik, to the people of Odisha. Mr Kovind who arrived at the Mr Patnaik International Airport in Bhubaneswar from New Delhi straight drove to Cuttack by road to dedicate the Museum to the people. Prior to the dedication of the Anand Bhawan Museum and Learning Centre, the President visited the Janakinath Bhawan, the birth place of Netaji Subash Chandra Bose at Odia Bazar which has been converted in to a National Museum of Netaji Subash Chandra Bose. Mr Kovind and Odisha Governor S C Jamir garlanded the statue of NetajI Subash Chandra Bose and went round the National Museum where the belongings of the great patriot leader Subash Chandra Bose have been displayed. From the Netaji Subash Chandra Bose's birth place, the President accompanied by Governor S C Jamir and Chief Minister Naveen Patnaik went to Anand Bhawan, the ancestral house of legendary leader Mr Patnaik and centre of Odisha’s social and cultural awakening during the first half of 20th century. The Anand Bhawn was built by Biju Patnaik's father Laxmi Narayan Patnaik which has witnessed many historic incidents that had changed the course of Odisha’s social and political history. As a tribute towards the immense love and affection o f people towards Biju Patnaik and his dreams of modern Odisha, his two sons Prem Patnaik and naveen Patnaik had gifted the historic building to the people of Odisha on January 13,2015. Later the Anand Bhawn was developed into a Museum and Learning Centre and was dedicated to the people by Mr Kovind during his maiden visit to Odisha after assuming the post of President. The museum housed various personal belongings of Biju Patnaik and several photographs from his childhood days narrating his contribution to the freedom struggle and building of the modern Odisha. Later the President addressed a gathering at the Indoor Stadium where he recalled the contribution of legendary leader Biju Patnaik and said he was honoured to visit the birth place of two great leader- Netaji Subash Chandra Bose and Biju Patnaik during his first visit to Odisha. It was an honour to pay tribute to two great leaders- Netaji Subash Chandra Bose and Biju Patnaik who played a major role in the freedom striggle, Mr Kovind said. Mr Kovind said during the freedom movement two Anand Bhawen, one at Allahabad and the other at Cuttack had played a pivotal role where the strategies for the freedom movement were discussed and chalked out. The President said he was delighted to see some photographs at the Anand Bhawan Museum depicting the brave and courageous act of Biju babu, one such being the journey from Cuttack to Peshawar on cycle by Biju Babu and others.This has indicated that Biju Babu had emphasized on the physical fitness. He said Biju Babu had a vision for the development and always advocated for the empowerment of women stating that without the empowerment of women, the nation could not prosper. Mr Kovind said Biju babu’s contribution to the people of Kalinga will be remembered for ever and his ideology will always be a guiding force for the youths of the country.