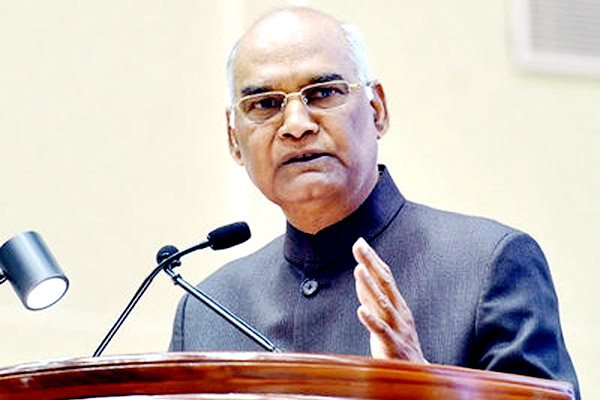 Agencies, New Delhi President Ram Nath Kovind on Sunday signed the Ordinance for death penalty for convicts in child rape cases, according to sources. The Ordinance, approved by the Union Cabinet chaired by Prime Minister Narendra Modi on Saturday, seeks to amend POSCO Act to include the provision for death sentence to those found guilty of raping a child below 12 years of age. After bringing the Ordinance the government said it will provide effective deterrence against commission of rape and instill a sense of security among women, especially young girls. The government move come after a public protests against rape of a young girl in Kathua in Jammu and Kashmir and a teenager in Unnao in Madhya Pradesh. On Saturday, an infant was raped and murdered in Indore. The minimum punishment in case of rape of women has been increased from rigorous imprisonment of 7 to 10 years, extendable to life imprisonment. In case of rape of a girl under 16 years, minimum punishment has been increased from 10 to 20 years, extendable to life imprisonment. In terms of gangrape, the cabinet stated that the punishment for the gang rape of a girl under 16 years of age will invariably be imprisonment for the rest of the life of the convict. With regards to rape or gangrape of a girl below the age of 12, the cabinet said the accused would be sentenced to 20 years’ of imprisonment, imprisonment for life or death. The cabinet also decided to put in place a number of measures for speedy investigation and trial of rape cases. It has also provided for a six month time limit for disposal of appeals in rape cases. Among other provisions of the Ordinance, the cabinet prescribed that there will be no provision for anticipatory bail for a person accused of rape or gang rape of a girl under 16 years. It has also been provided that the court would have to give a 15-day notice to the Public Prosecutor and representative of the victim before deciding bail applications in the aforementioned category.

President Ram Nath Kovind on Sunday promulgated Fugitive Economic Offenders’ Ordinance 2018 to deter economic offenders who dodge the present procedures of Indian laws. The Union Cabinet, chaired by Prime Minister Narendra Modi, had on Saturday approved promulgation of the Ordinance. The Ordinance would lay down the measures to empower Indian authorities to attaché, confiscate the proceed of crime with the economic offenders and thereby deter them from evading the law by remaining outside India. The new regulation is expected to re- establish rule of law with respect to fugitive economic offenders as they would now be forced to return India to face trial for committed offences,This will enable the banks and other financial institutions to greater recovery from financial frauds committed by them. The proposed regulation makes provisions for ‘Special Court’ under the Prevention of Money Laundering Act 2002 to declare a person as fugitive economic offender. A fugitive economic offender is a person against whom an arrest of warrant has been issued in respect to a ‘Schedule Offence’ and he or she has left India as to avoid criminal prosecution.A schedule offence refers to a list of economic offences containing in the Schedule to this Ordinance. The proposed regulation will also ensure that such cases of Rs 100 crore or more will be prosecuted in these courts to avoid pendency. The Government’s move comes after the series of economic offenders have left country to avoid the legal procedures against them. The Ordinance is seen as an attempt by the government to crack whip on fugitive economic offenders like Lalit Modi, Vijay Mallya, Neerav Modi and Mehul Choksi.