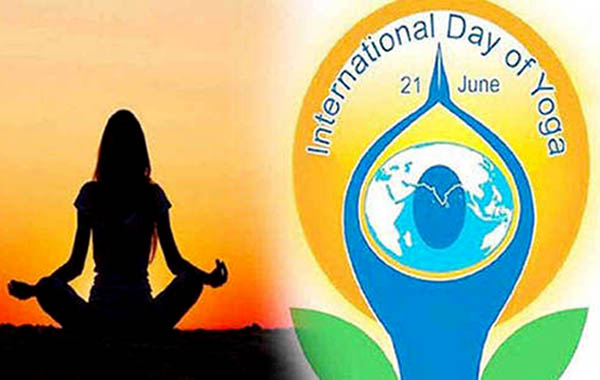 New Delhi, Stage is set for the Fourth International Yoga Day to be observed across the world on Thursday.The theme for Yoga Day this year is "Yoga for Peace" while in 2017 the theme was 'Yoga for Harmony and Peace'. Prime Minister Narendra Modi, who is taking India's soft power global, will lead the International Yoga Day celebrations in Dehradun while President Ram Nath Kovind will join his Suriname counterpart Desi Bouterse to perform Yoga in Paramaribo. External Affairs Minister Sushma Swaraj, who is also on a tour to Europe, will lead the IYD celebrations at the European Parliament in Brussels. Prime Minister Modi had within months of taking over in 2014 proposed that June 21 be designated by the United Nations General Assembly as International Yoga Day -- which was later accepted overwhelmingly. June 21 is the longest day of the year in the Northern Hemisphere and thus has special significance in many parts of the world. At the Yoga Day celebration in Dehradun, the Prime Minister will join thousands of volunteers, performing Yoga asanas in the lawns of Forest Research Institute located in the lap of the Himalayas. Mr Modi had earlier participated in Yoga celebrations at Rajpath in New Delhi in 2015, in Chandigarh in 2016, and the Ramabai Ambedkar Sabha Sthal in Lucknow in 2017. Home Minister Rajnath Singh will participate in this year's Yoga Day in Lucknow. Vice President M Venkaiah Naidu will join the Yoga enthusiasts in Mumbai. Greeting Yoga enthusiasts across the world on the occasion, Prime Minister Modi has said that Yoga is one of the most precious gifts given by the ancient Indian sages to humankind. "In a distracted world, Yoga helps focus. In a world of fear, Yoga promises hope, strength and courage,” the Prime Minister said. “Yoga is not just a set of exercises that keeps the body fit. It is a passport to health assurance, a key to fitness and wellness. In a world of excess, Yoga promises restraint and balance. In a world suffering from mental stress, Yoga promises calm," he added. In the run-up to International Yoga Day, the Prime Minister has also taken to social media to share the intricacies of various Yoga Asanas. He has also shared pictures of people performing Yoga, at various locations across the world. To mark the importance of Yoga, Indian missions abroad will also organise programmes on Yoga with participants from various sections of the society. Sadhguru Jaggi Vasudev, a Padma Vibhushan recipient, will visit the army personnel at the Siachen base camp on IDY and also address the armed personnel. About 200 soldiers deployed at various posts at Siachen Glacier, located about 21,000 feet, would attend the Yoga session and Sadhguru's talk at Siachen base camp. In Delhi, yoga exercise will be held across the city in various public parks. A major exercise will be organised at Rajpath also.Delhi Police and paramilitary forces will also perform yoga.